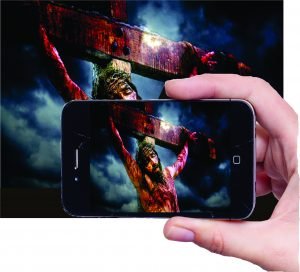 Image of Jesus Christ crucified on the cross furnished by 2028 End.com prophecy website. The interactive iPhone artwork is by Stephen J Key.

I spent quite a while talking to my brother on the first  Easter Sunday of the outbreak. He was holed up in his second home with other members of his family in Pass Christian, Mississippi due to a self imposed quarantine measure he and his daughter’s husband, Chad, had set in place for the previous 3 weeks prior to that celebratory day. I asked him if he was going stir crazy and he unabashedly admitted that he was. Still, they felt somewhat safe by taking this course of action.

Since he and his wife, Cindy, live in a suburb that borders the greater New Orleans metro area, they wanted to get away from one of the key hot spots in the nation for the Covid-19 infestation, better known as the Corona Virus pandemic. They were situated in a holding pattern with their daughter, her husband, and two grand daughters.

In that same period of time, my wife and I had left the house on two occasions for groceries and that was it. On that particular Easter Sunday, I was inspired to reflect on what it all means to us and for everyone else in the nation. I wondered if any part of this scenario was going to instigate a new norm for the indigenous people of the United States, and for those inhabitants of each country throughout the rest of the world.

I have listened to commentary on trusted news programs (as opposed to the fake news outlets) that have focused their research on Chinese laboratories and what is going on there. Their reports state that many hundreds of viruses have been identified by researchers who work in the infamous laboratory situated in Wuhan, China that comes from bats that are pulled out local caves to get critical information.

A local resident technician in one of their laboratories has revealed the fact that China is not only a centralized area for location and study of these viruses, but that many of them are extremely dangerous. He also said that most of them target the lungs to create havoc within your body.

If this intense situation gets out of hand and creates more types of serious infestations than what you see now, will your freedoms to move around as you please be jeopardized from now on? Is China engaged in some type of obscure biological warfare mission designed to immobilize the rest of the world’s population while chosen citizens from that country receive a well planned series of immunizations to ensure that they survive?

Easter Celebration On The Fly

The one day that the churches of our country see filled with people that don’t attend regular services as a rule is Easter Sunday. Many more who forgo that option celebrate with a bunny, colored eggs, and baskets filled with candy. However manner in which a person chooses to honor that special day, one thing is clear. It is usually a moment in time when people come together to engage in festive activities and partake of scrumptious fare together. But that was not so not on that one glorious Sunday.

As a populace, we found ourselves confined in our homes to escape the threat of a dangerous force moving through the air that we breathe in each community that we lived in. We had to endure the hardship of being shackled to our environs. In other words, we had to adapt to our restrictive living conditions to fit this newfound lifestyle.

With that said, I pondered the concept of what people did to cope with this travesty. Are you a husband forced to stay home and communicate with your wife? Do you want to keep your kids from beating each other up by spending some time with them and engaging them in a worthwhile activity. If schooling is online from dedicated teachers, do you help out by taking a sincere interest in their studies now?

Chores Around The House

I suppose that one of the most dangerous results of this situation is the fact that husbands are now held captive by wives who want all the chores done around the house they didn’t have time to do before. Like maybe fixing a bad door lock or that pesky problem under the sink? I lucked out by hand tightening a loose connection on the drainpipe under the master bath sink and stopped a leak that had been dripping for weeks. No tools needed.

I also decided to give my wife an Easter present by starting the prep work, wall painting, and installation of custom baseboard in our hallway by the kitchen, a project which I completed Sunday. Since the walls are horizontal 1×12 wood boards that were never finished, the new look thrills her to death. A lot of work, but well worth it to make her happy.

You can do things like that, organize closets, take care of stuff outside, or get a garden ready for spring planting. Do you notice debris in places that didn’t get attention before? How about helping to rethink where pots, pans, or dishes are placed in cabinets and taking the time to make things more efficient? Maybe think about throwing out clutter in the garage or storage room that doesn’t matter anymore?

Electronics To The Rescue

I am learning to cook a lot of meals that I had no time for in the past. Even though my wife has an endless library of cookbooks, I have let my iPad spoil me by bringing up a new culinary creation from the internet at the push of a few buttons. Even though she shows me some from one of her favorite printed collections, it is easier for me to have a back lit version I can readily follow in the kitchen. But I do use her countertop book stand to make viewing easily accessible.

Our son, Eric, in upstate New York, brought a new cell phone app to our attention called ZOOM! When each member of the family downloaded it and set up our own accounts, he created a link which allowed us to activate the system. We then found that we could join with him and his wife online in the same way a conference call is made. When our daughter in Nevada logged on, we then all interacted with each other on that Easter Sunday in a multiple split-screen communication platform. Even though we all live miles and miles apart, it was like a family get together, electronic style!

As far as my other exploits were concerned, I hadn’t been doing much writing up to that point since I was more focused on finishing the work I started inside the house. Getting a pinched nerve in my back then didn’t help my cause, but I plowed ahead anyway with short breaks for respite. When I resumed the task of creating more blogs, I found out that it was a satisfying way to spend a sequestered afternoon when I didn’t feel like being entertained by the TV.

As I jabber on, I wonder what the actual day of crucifixion and subsequent day of resurrection of the Lord Jesus Christ would have been like if cell phones, computers, and the internet had been available on that very first Easter. Or, what if that special event took place in the modern world we now live in. What would happen?

Would pictures of the lonely and humiliated figure on the cross be sent around to the civilized world? Would the Roman soldiers try to confiscate all known communicable devices or destroy the cellular transmission towers in the city and beyond? Would a fully equipped paramedic van be standing by to haul the body away?

And the tomb! Would the women and apostles immediately connect with each other by way of videos and texts describing the location of the stone that had been rolled away? Or present pictures of an angel situated inside the cave sitting on top of a cold funeral slab next to discarded burial garments? Would the somber setting go viral and fill our devices with visual displays and awkward commentaries as we sat transfixed at home. Would we be updated with any new information about the event as it happened? I wonder!

I suppose I could go on and on about the ways we can spend our lives to keep safe from the deadly threat that now stalks us. It doesn’t seem fair that we have to be subjected to austere survival conditions during a period of relative calm that permeates a planet devoid of worldwide conflict.

With that said, I will point out that we have become spoiled by the overall access to freedoms that we do have. Freedoms now restricted by an ominous disease that may be thrusting us into a new way of existence. A period whereby we have to adjust to a new norm.

Since we must now be socially aware of the potential dangers presented by being in close proximity to other people, we have to give new credence to maintaining exceptional cleanliness and fostering environmental concerns.

I suppose it is up to each one of us to adapt as we find  necessary to do so. Fortunately we have alternate means of escape. We can use our hands and brains like never before, punch buttons on electronic devices to interact with others, or just meditate, pray, or read a book. Like maybe directing some of our attentiveness towards Biblical Truths which predicted our present calamities over 2000 years ago.

It’s one more option that provides us with an opportunity to make meaningful and effective use of our time when we have nothing else to do. You might also include a prayer now and then to beseech the Lord for guidance going forward. After all, He died for the sins of all mankind, and His resurrection day celebrated by the Easter miracle may be the only hope you have for getting you through this troublesome time we are in.