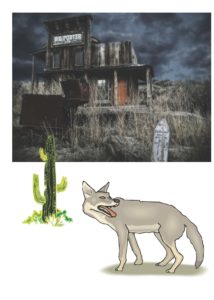 The Edge Of The City

After my wife and I were married, we left New Orleans and moved to Arizona. We had little knowledge of the area and just decided to go and live there for the change of pace. We had no particular place picked out for a residence, no sleeping accommodations, little money in our pockets, or prospects for employment. We just up and went.

It is a high desert area that is enveloped by a hot, sweltering climate most months of the year. There are many summer days that hover well above 100 degrees, with no hope of relief from rainfall at all, but encumbered with dry blowing winds that sear your skin and chap your lips.

I had little knowledge of marketable skills and even less regarding all that was involved with living in a desert environment. It was a great big adventurous exploit for two young people at that moment in time and we almost felt like pioneers.

We found an apartment after spending a week in a two bit motel near the the heart of downtown Phoenix. Part of a 4 unit complex, it was situated in a small community (back then) called Glendale, Arizona, a town which bordered the outskirts of the metropolitan area. It was way out yonder where large open farm fields, crop dusters, and cattle ranches filled out the tab for the kind of neighbors we had. Fortunately, grocery stores, supply houses, and other shopping venues were not too far away.

VA To The Rescue

I decided my best bet for supporting the family was pursuing a job as a carpenter. I had no experience in that trade but did gain some smarts figuring out how to build cabinetry while employed as a maintenance supervisor of an apartment complex in the New Orleans area. What helped me make the choice was the fact that construction activity was booming in the Southwest at that time and I thought I had a chance to succeed in that particular field of endeavor.

So, I gave it a shot after acquiring a dime store hammer, carpenter’s apron, and 1/4″ Black & Decker drill that smoked when pushed too hard. However, as one might expect, I was fired from the first few jobs because I lied about my experience and it showed in my work. Knowing I had to find a solution for my incompetence, I decided to hit some books at the library and learn how to frame a house from the pictures I saw and the explanations given. With that learning curve tucked under my belt, I eventually landed jobs that just needed bodies to get all the work done and onsite training finally kicked in. By the time my 10th job rolled around during that first year of revolving door employment, I was considered a viable candidate for carpentry work.

Since money was tight, I sought additional methods of acquiring cash by looking for a side hustle. One opportunity presented itself in the guise of a realtor who handled foreclosure renovations for the Veterans Administration so the reacquired homes could be made suitable for resale. When I met with him, I found out that a contractor’s license was not a mandate for bidding on those types of government subsidized projects. After he determined my capabilities, he gave me a shot and I won several bids. While doing the work, I taught myself how to repair and remodel everything involved with the inside of a house.

One of those homes caught my eye and made me think it would make a suitable one  to live in. This idea was bolstered by the fact that VA terms were very easy to comply with and the down payment was ridiculously low. When I made my wishes known, that realtor sold me the house for $20,000 and worked the loan agreement out so that I wound up with an all inclusive mortgage payment of only $200 a month.

It was located near the apartment complex we lived in, but at the edge of the city’s boundaries in more of a semi-rural type of environment that pervaded the extreme outer limits of the area. Luke Air Force Base had a flight path nearby and sent fighter jets screaming overhead now and then. A mile or so from the house, one rancher had no compunctions about draining the blood out of butchered livestock into a ditch alongside the road everyone traveled on.

One iconic feature of the landscape was the existence of a large open field across the street from our new home. It was owned by a dairy farmer who had lots of livestock that generated tons of manure each and every day. We were made well aware of that fact when down wind activity swept aromas our way.

As stated earlier, this was a totally different way of life for me. My wife was more adept at situations like this because she had lived in boonies territory as a child at a ranch in New Mexico and again at a boarding hose situated in a small farming town located in Iowa. Horses and such were a way of life for her, but nothing like that for me. The bottom line, however, was that I was still a city boy at heart.

Everyone in that lower middle class neighborhood (a condition which still defines the area to this day) had poorly maintained front yards that used sand, rocks, and cactus for landscaping. I didn’t like that concept at all, so I planted grass and fruit bearing orange tress to buck the trend and help show what a home could look like if given half a chance.

Hot sunny days were a significant factor that affected the temperature controls in the house and sun facing windows were the biggest threat. To help keep the rays off the glass which, in turn, transmitted heat into the house, I fabricated large wood shutters that let light come in but still allowed the glass panes to remain relatively cool.

Another downside to living in this area was the proximity to  neighbors that were less than desirable. One inconsiderate clod decided he would test the positraction capabilities (limited-slip differential feature) of his Chevy Malibu on the grass lawn in my front yard which almost caused a fight between us. Another bottom feeding neighbor who lived next door with his scuzzbucket wife broke into our house while we were away and stole my guns and appliances. After that, another low life thief pilfered the Jerry cans off my Jeepster in our car port, and I never found out who it was.

On the positive side of things, we had easy access to open desert and secluded camping areas. I would often take my Jeep out to a nearby area of open desert with my kids and chase jack rabbits, coyotes, and other critters that roamed near the house.

Another thing that we had available to us there was a front row seat at local hot air balloon events that used that field across the street for landing their craft while onlookers arrived and participated in the activities. Our brazen children even joined in with the festivities by rounding up other kids that were brought to the event by their parents. They then covertly led them them over to our house in tandem unbeknownst to many a panic stricken mom and dad who eventually found out what happened and recovered their missing charges.

One thing that living this way makes possible is the opportunities presented for initiating last-minute camping trips. For these jaunts, I had purchased a bed mounted camper that sat on the back of my pickup truck. Since I wanted to remove it when not being used, I had installed hydraulic side lifts that allowed me to take it off by myself without the need for additional equipment. Later, we traded it for a self-contained motor home.

A developing hobby for us was finding and camping at abandoned mines and ghost towns scattered throughout the Arizona desert and mountains. To assist our efforts, we bought a book that listed them all, gave historical data, and showed approximate locations.

There were many within a 50 to 70 mile radius of our house. We would locate the area and camp there for the weekend. Since the truck had a limited slip differential that helped with traction, rough terrain was not a problem. The Jeepster that we towed behind our rig got us into tough viewing areas that were otherwise inaccessible.

The houses were quite small with low slung doorways that cut me off at the forehead. Adobe, framed, and even block or rock style houses pervaded these sites. Mine shafts still had mining car tracks heading into them, but were left dangerously wide open and unprotected.

We found old windmill blades, silver spoons, dishes, and tools in those towns, most of which were often located far from beaten paths. The miners and residents must have had someone go for supplies, or had a vendor frequent their site. As for finding water, wells were not a common occurrence.

A Dream For The Future

Some of those ghost towns got noticed and were starting to gain occupants. Those determined individuals probably wanted to live far from city confines, so I think they solved that issue by getting those abandoned home sites really cheap, or just claiming them outright.

As I perused that situation, I found myself envying those determined homesteaders. It is something I wanted for myself, but I didn’t like the fact that they were so far removed from any stores that provided supplies or food. They had to plan, as do many country folk these days, their all-inclusive shopping trips. That was a downside to the whole idea of living that way.

My dream was to live out in a country environment, but not more than 10 miles from a town or depot where I could obtain supplies and other needs. I was also losing interest in living in the desert around that time. I favored trees, green grass, and even rolling hills if I could not be near a mountain as such. So those parameters became part of my bucket list for future consideration.

So, while in pursuit of that dream, our next opportunity for this kind of lifestyle didn’t fare too well. While maintaining a homestead in Utah (as revealed in a previous blog entitled A Hybrid Country Life: The Boonies in Utah), my hopes were dashed once again. So I figured I would have to wait far into the future to achieve what I was looking for. I will talk about it in a future blog and give you more details when I do.