I love croissants, but only the ones made with butter. A crispy large hot croissant with ham, eggs, and cheese is one of the top 5 breakfast meals that I love to have in the morning. But if they are not made just the way I like them, they become more like gut fillers than a delectable feast.

For the longest time, I had been used to fast food restaurant or pre-made frozen store bought versions. Then one day I was on a construction job site and the local food truck arrived for the morning break and I was hungry. So, as much as I prefer to avoid getting food this way, I succumbed to the temptation.

When I saw a breakfast sandwich in the hot bin, I took a chance. It was a large crispy croissant with a slab of ham, a scrambled egg, and cheddar cheese melted inside. After I took one bite, I felt like I had entered into gustatory heaven. It was the most delicious breakfast sandwich I had ever tasted.

I went over to the food truck purveyor and asked him why the sandwich tasted so good. He told me that the toasted croissant was made with “butter”. It was light and flaky and very much different from croissants I was used to which were made without this necessary ingredient.

My wife and I are pretty conscientious about having a healthy breakfast from Monday through a Friday each week. The meal includes blueberries, strawberries, peaches topped with either cottage cheese (her) or Greek yogurt (me). We also include some cashews for added protein.

On Saturdays and Sundays, I cook a regular eggs-centered breakfast. The list includes:

Even though that list includes my long standing favorites, I have added a new one to the mix. However, it requires me to find a source for large butter croissants that I can use to make my own breakfast sandwiches. My previous attempts were made with an English muffin, but they can be tough to eat if not perfectly fresh and toasted a little too much.

Local Supermarket To The Rescue

Since we live in a rural area outside of a small town, our two choices for grocery shopping are a Walmart Super Center or a Winn Dixie supermarket. Since the corona virus pandemic forced us to initiate self-imposed quarantine measures, we have stayed clear of the crowded Walmart and use the much more lightly inhabited Winn Dixie.

The croissants in the bakery section at a Walmart are small and unacceptable for the type of breakfast sandwich I wanted to make. Winn Dixie has both small and large. Even better still, they are made with butter and have that light flaky texture I was looking for. That was perfect because they also provided the flavor I was looking for.

NOTE: Our local Winn Dixie Supermarket has a nice bakery section where we can buy Artisan Style baked goods like Ciabatta Bread, Focaccia Bread, and the butter Croissants mentioned here. However, we have found a lady in the vicinity who also bakes these delectable goods for us as well. Nice! 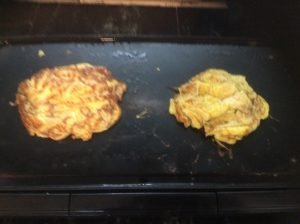 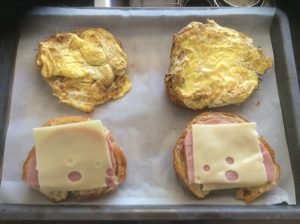