DANGEROUS DIAMONDS IN THE ROUGH 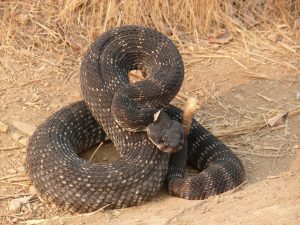 Trekking In The Wild

Have you ever been out hunting, camping, hiking, or just gone for a walk in the woods and come across a snake? To make the question more definitive, was it a poisonous one? Sometimes it is hard to tell and you need some type of reference to identify them.

For example, a Coral snake is poisonous, but it’s banding can confuse it with copycats like the Scarlet King snake and the Florida Scarlet snake, both of which are harmless. Poisonous Copperheads can be confused with up to 4 or 5 different harmless critters of the serpentine genre. But not so with Rattlers. Unlike other snakes, they have a rattle and it works well as a stern reminder of what type of snake you are dealing with.

I used to go hunting with friends in the Mojave Desert in California years ago and ran into all sorts of wildlife. Jackrabbits, quail, horned toads, road runners, lizards of all types, you name it. But the one creature I feared most was the Western Diamondback.

Since many of those forays meant staring at a star-filled cosmos while lying on my back in a not-so-protective sleeping bag smack dab on the ground, I often wondered what critter would join with me during the night as I made unsuccessful attempts to drift off into a deep slumber. Tarantulas maybe? Or how about something of unknown origin? Or a poisonous snake for that matter.

Rattlesnakes In The Shadows 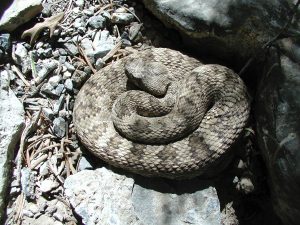 Most snakes hate to be out in the hot sun, and that is why you can sneak up on one coiled up inside a rock crevice or under a heavy bush that blocks direct rays from striking its body. If you do so quietly, you stand an excellent chance of having a rattlesnake strike you on the leg when you least expect it.

On one trip we spotted one slithering into a hole when it heard us coming. Since we had folding shovels with us to help set up our campsite, we did the unthinkable. We decided to dig it up. A crazy idea that could have gone horribly wrong.

Since there were several possible entry points for the thing to crawl in or out of, we each picked a different opening in the ground. Since I am always the lucky one when it comes to paying the price for ill-conceived endeavors, I got the snake.

It came shooting out of its collapsed tunnel and I immediately hit it with my shovel. Moving sideways, it wanted to strike me right off the bat. I backed away just before it did and called for the dude with the machete to come on over and help. It never did get a chance to shake its rattle-embedded tail before it’s head came off.

After another companion slit it down the center to remove the skin, I tried to test my strength against the headless body that continued to wriggle and squirm. I tried to stretch it out straight, but the muscles in that seemingly lifeless form still coiled up against all the strength I could muster and pulled my hands together. Even the severed head was off to the side still trying to chomp down on something. Freaked me out!

Cat Vs. Snake Looking For Food On Our Porch

One day, not to long ago, my wife came running into the house saying that there was a big snake in our back yard daring our orange and white tabby cat to a duel. So I went running out to see what it was, and boy was I surprised.

What I saw was a big dark colored snake coiled up with its head in the air facing our cat who was out there trying to figure out what it was. Fortunately, our aggressive feline was keeping a safe distance away from the serpent, but was still relentless with repetitive pursuits of checking this unknown entity out.

I did not know for sure what the critter was, but was able to make a positive identification afterwards via the benefits of a website wildlife information service. After checking the iconic pattern on the skin of the critter, I determined that the intruder was an Eastern Diamondback Rattlesnake! There was no mistaking the diamond pattern, even though I had to discern the difference between it and a Water Moccasin, which has similar markings and is venomous as well.

No longer owning a gun, I had to come up with another solution to separate the two animals before our cat got bit. My wife suggested the water hose, and I realized this might work since cats hate being in water, especially when it is sprayed on them. So I sent a stream towards the cat first and sent it running away, a feat which solved the first problem for me. Then I hit the snake with a powerful stream from my garden nozzle, and it finally decided to leave as well.

The best I could determine was that the snake decided to come out in the middle of the day because it was after the cat food on our back porch. Since the grass and weeds were over a foot tall, it had little trouble concealing itself on its journey towards the house. Fortunately, the cat did not suffer the same fate as his brother who got bit by one and died a few days later.