DEATH OFF THE COAST OF CALIFORNIA 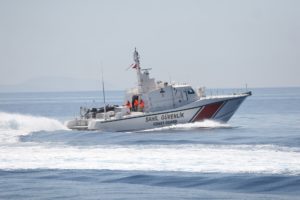 My Take On Fishing

I am not a true fisherman per se’. My idea of a true fisherman is someone who loves to be out on the water and is willing to spend countless hours waiting for a bite. The serenity of being alone or with a few friends adds to the mystique. I am not that type of person.

However, I do love the thrill of running into a school of fish that are eager and hungry. Ones that you can hook even without bait, bringing them in one by one until you are exhausted. That is a rare occurrence, indeed, and I have experienced both sides of the coin.

I went on several trips with my dad while still a teenager, but not as a father and son duet spending time together alone. He always managed to drag along some friend or acquaintance of his for camaraderie. Some of those undesirable exploits were on charter boats out of San Diego, California. Said excursions were never any fun for me and I dreaded being required to tag along.

Even after getting up before the crack of dawn and leaving at 3:00 or 4:00 am, we were always too late when it came to securing a bunk down below the deck. For a solution to this dilemma, I sometimes laid myself down on the anchor chain up by the bow. Since that was never a comfortable option, I got no rest while doing so.

Other issues confronting me on those big boats were the continuous action of being tossed about on a rolling sea and the awful smell of diesel fuel belching out of the smokestack above. The combination of these two unenviable features always made me feel nauseous and my eventual fate was the contraction of the seasickness demon for half of the time I was onboard these tugs. That malady is an especially horrible one for me because even the use of Dramamine didn’t help much.

When I finally did get around to doing some fishing, my catches were usually junk species and bottom feeders that got thrown back by the others around me when they landed one. Even worse, several of those times found me enviously watching Asian fisherman bring in large specimens of tuna or albacore with regularity. They never did share the secrets they used to achieve results like that and I never found out how it was done.

Better Luck On The Gulf

There were some celebrated moments that came about while fishing in the Gulf of Mexico whereby I did experience some remarkable degrees of success. One time, while I was with my dad and a friend of his who owned the boat we were in, we spotted a school of fish that gave off flashes of a reddish color that sparkled in the sunlight. It turned out to be a large grouping of Red Fish and they were eagerly searching for food. When we hovered over the top of those frenzied denizens of the sea, they acknowledged our presence by biting at silver-spoon lures we threw over the side of the boat without any bait attached. We even hooked some of those suckers on other parts of their bodies after they literally ran into our hooks.

Another time, along with my brother Chris and two of his friends, we linked up with a charter fishing operator who had a 20′ center console style of outboard powered boat. He ferried us out to one of the rigs offshore several miles from the coastline of Louisiana. It was a long trip out in rough open water.

When we finally reached our destination, the resultant outcome of our decision to trek this far out was nothing less than extraordinary. In no time at all, we found a massive school of Speckled Trout parked directly beneath us. Once we engaged them with our shrimp hooked lures, they not only bit at the alluring bait, but also snagged their fins and tails on the exposed barbs at the end of our lines with little effort on our part. What a thrill that was, and I really enjoyed myself on that particular outing.

A fishing trip that boggles my mind was the horrific one that took place off the coast of California near the town of La Jolla one chilly Saturday morning. That community was still a sleepy beachside retreat back then and suitable for inexpensive weekend jaunts like the ill-fated one that me, my dad, and 2 friends of his were on at the time of the “incident”. We were doing our thing in an older rig reminiscent of the large skiffs you often find in fishing villages throughout Europe or some of the islands that dot the Caribbean. It was very large, quite long, and wide open with no cabin to shelter you from the sun.

We left early that morning and set out for a cove bordered by some high cliffs and a rock strewn shoreline nearby. The water was a little choppy, compliments of a light breeze about us, and the sun was shining through some clouds overhead. The temperature was somewhat cold at that particular hour and we wore jackets to keep warm.

After an hour or so of zero activity, we were trolling along when I hooked a barracuda and brought it in. Shortly thereafter, we noticed a large Coast Guard helicopter landing on a cliff about a quarter mile from our position. Within moments of that occurrence, a large Coast Guard cutter ship made its way towards us and eventually pulled up alongside.

Within minutes of that auspicious maneuver, two scuba divers jumped overboard into the water and dove down below our boat. There was dead silence for maybe 5 to 10 minutes after that instance during which time we waited patiently to find out why. We had no idea of what was going on and experienced an eerie feeling, at best.

Suddenly, we saw them break the surface of the water about 10 yards from us. They were carrying a fully clothed victim who apparently had fallen off of another boat and sunk right to the bottom of the bay. His sunken facial features displayed a very pale color around the eyes and mouth, so we knew right away that he had drowned. The heavy jacket and large leather boots he had on probably did him in. I guess the man did not know how to swim, had noone onboard his boat to help, and stood no chance of saving himself once he hit the water. What a sickening and unforgettable sight that was!

That event ended our day. We had already pulled in our lines and decided to head back to the docks. That was the first time I had ever seen a dead man in person that wasn’t already resting in a coffin. The event stayed transfixed in my mind for a long, long time afterwards.

I did return as a scuba diver years later, but by then I was more interested in snagging Lobsters and spearing fish under the sea than sitting on top of it in a fishing boat hoping for any type of action at all. That method  was a more profitable one for me because I could look those critters in the eye before capturing them and hauling their tasty carcasses home for dinner.

Still, that vision of a lifeless human being breaking the surface of the ocean waves still haunts me to this very day. I have never experienced anything like it since, and hope I never will again.