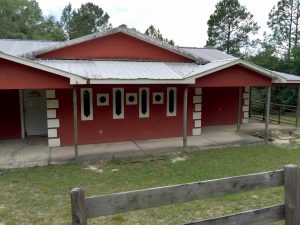 I don’t like working on roofs. The basis for my fearsome mindset took shape back when I contracted a job in California that included the repair of a wood shingle roof on an older home. That type of covering requires a breathing space from the underside and the framing procedure does not allow the use of plywood to cover the rafters.

Open slats are installed with spacing 6″ to 8″ apart. Wood shingles swell when wet to seal against leaks, and must dry out after the rain. Since the shingles on my project had deteriorated beyond repair, they all needed removal before I could install the new ones. Since I had no employees at the time, I was taking care of all the tasks by myself and became the go to guy for getting it done. Since time was of the essence, I made the unenviable decision to remove the old shingles the same day a threatening storm was scheduled to roll in.

To protect the attic and ceilings of the structure, I covered the exposed areas with heavy plastic sheeting. When the rain started, the plastic got wet and slippery. At one point in the undertaking, I made the mistake of stepping on the slick surface and my shoes lost traction. Before I could grab onto something solid, my whole body shot off the roof like a bullet fired from a gun. 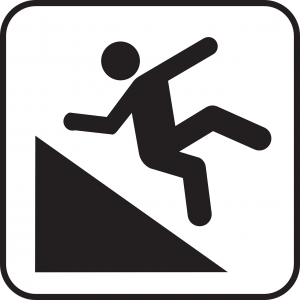 Fortunately, the pile of discarded shingles on the patio below broke the force of my fall. I did not break my leg, but sprained it so bad that I had to wear a cast to help me stand up and walk around. Ever since that day, I have had an outright fear of working on roofs, especially wet ones after a storm passed through.

The roofing material on my country house is metal. I knew when I first looked at the house that it required work to solve leakage problems. Ceiling drywall inside the house had been opened up by maintenance personnel to allow leaks to bypass the unaffected areas of the covering and fall straight to the floor. Four or five areas were targeted inside the house.

When I brought my extension ladder to the site on a followup trip, I found the source for some of the problems. Two long hip sections were missing metal caps and the framing lumber was exposed to the elements. This meant having repair metal caps fabricated by a local supplier would be my next objective. After they were made, I then performed the installation by none other than myself and solved one major issue with my roof.

As for getting up on the roof itself, I decided that the best method for me to traverse across the pitched metal safely was to crawl on it instead of standing up and walking around. My wife helped my thinking by revealing stories about amateur DIY homeowners who fell off their roofs and killed themselves when they hit the ground. This kind of possibility haunted me and I did not fancy myself becoming one of those victims. So now when I climb up on top of my house, I walk with as few steps as I deem necessary, then either lay down to make repairs, or sit on my butt and scoot around.

I am fortunate to have found a house covered with metal roof panels that have virtually no rust anywhere in site. Unfortunately, I couldn’t say the same thing for the screws that held the panels in place. Some were so rusted that they broke off easily when I tried to remove them. Others were simply missing, or the screw is popped up in the air which means they are performing no sealing capabilities whatsoever.

My first clue to the severity of this problem was the existence of a leak in the kitchen where a large section of drywall had been removed. When I observed the drip during a heavy rainstorm, I noticed water dripping underneath a screw already in place. This meant the rubber washer attached to the fastener was no longer doing its job. When I crawled up on the roof to the area in question, I replaced a whole bunch of suspect screws. I wanted to make sure I did that so I wouldn’t have to go up there more than once.

For two years I have had to deal with a tricky leak in my cathedral wood-covered ceiling in the living room. Since the stupid drips moved around to various locations during heavy rainstorms, the solution was hard to figure out. So I had a friend come over and help me solve the problem. Since he was a retired professional roofer, I had him check out the area in question. He found some holes that were so large, he had to fill them with caulking. A replacement screw would not suffice.

I became jealous watching him get up there and walk around in fearless fashion. The trouble was that it was so hot the day he did the repairs, I had to pull him off after he finished the most critical areas. That left scads of other fasteners to deal with later on.

After Hurricane Michael hit our area, I had the suspicious feeling that insurance rates for our area were going to skyrocket upwards for the next year. We didn’t have any damage, but major hurricanes have a tendency to rattle providers and that possibility bore me out. The follow up billing from our existing company increased by over $1,000 for one year of coverage.

When I first saw that bill, I panicked and began to search for a replacement carrier. I started my quest by getting a quote from my auto insurance company, but their rates had also increased to mirror that of my renewal invoice. So I went online and located a broker in Chicago who found me a carrier in South Florida. They offered me a better rate than my best cost to date from any of my previous carriers I had for the 3 previous years in the house.

The problem with obtaining this favorable number was that they required a professional home inspection of my property. This meant that the inspector would need to ascertain the condition of my roof. Bummer! 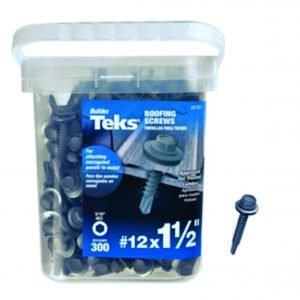 Since I could not expect my friend to fix my whole roof, it was up to me. The solution was to make the dreaded decision of replacing all the rubber-washer-based 1/4″ screws with the larger 5/16″ variety myself in intervals. All 2500 pieces of them!

So, I placed my long extension ladder near a valley section of roofing to help support me if I started to fall. The ladder jutted up about four feet above the roof to provide a handhold to help me stand up and grab on to.

I used a mid sized bucket that holds 2 battery powered drills, one with a bit to unscrew the old 1/4″ fasteners, and the other drill (an impact driver) to screw in the new 5/16″ replacements. The container also had enough room to hold the plastic case of new screws, plus an empty container for disposal of the old ones.

When I got to the work area for the day, I laid down on the roof and removed and replaced all the fasteners that I could reach without shifting my body. When done, I scooted myself and equipment to the next location. I found I could do 6 to 8 pieces at a time with this plan of action. Working this way, I was able to keep up a continuous pace for about 2 hours at a time. I started late in the afternoon to avoid the sun and the searing heat emanating from the hot panels. The time frame alluded to is about all the time I had to work before the sunlight fades away and I am forced to quit.

Now that I have completed all of the work that needed to be done, the end result of this effort is that I essentially have a new roof since the panels themselves are in excellent shape. So far, to date, it looks like all the leaks have disappeared. That includes surviving some severe weather events with no unfavorable results to speak of.

Cost to replace my metal roof would have been about $28,000. The cost of 2,500 screws was about $325. plus that of a few tubes of roof sealant where some periodic caulking was needed.