CATASTROPHIC FIRE HAZARDS IN THE WOODS 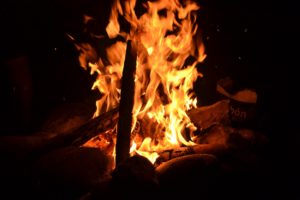 A Series Of Fire Holocausts In California

I had been watching the news when I wrote this blog that focused on devastating mid November fires in California. One of the areas burned is in the Santa Monica mountains. Another one is in the Thousand Oaks area of the San Fernando Valley near Los Angeles.

Since I lived both in Santa Monica and near Thousand Oaks at one point in time, I felt motivated to write this article. I know for a fact that California is way more heavily populated now than when I lived there in the late 1990’s. However, I had no idea that those populated areas were subject to so much devastation.

During my sojourn in that state, I witnessed earthshaking events like the great Sylmar Quake that destroyed numerous homes and several interstate infrastructures before the trembling ran its course. My vehicles have been torn up by sand-blown windstorms in the deserts outside of Los Angeles. I have seen brush fires on the sides of highways driven by Santa Ana winds that were as strong as gales produced by a hurricane. Still, nothing like these particular series of events happened while I lived there.

My first country or rural style house had little or no trees around it other than a wind break row of Eucalyptus trees off in the distance. The second semi-rural house had only orange trees which I planted away from the house in the backyard and were of no threat if they went up in flames.. My current house has trees nearby, but they are not a big threat if they become ablaze and start burning furiously, At least, that is what I think.

Trees always seem to be near, or even surround, many a rural home. Even in wide open prairies, the middle of a farm field, or simply a barren desert, there are usually a group of trees on the homestead. Sometimes there are so many that they hide the house from view.

Those iconic perennials seem to be the big culprit in the majority of California fires. Sage brush and dry ground cover are suspects for sure, but a big part of the equation this time seems to be that all the homes affected or threatened by these fires are nestled in forest-like canopies that surround said properties.

I wonder how the person who let a campfire get out of control feels about destroying thousands of homes and killing scores of people. Or the careless smoker who flips a cigarette out of a car window into brush bordering the roadside. I wish I was the one person who is innocent of such careless endeavors. But I am not. Nor are my kids.

As I mentioned in one of my previous blogs, I had an intense desire to discover how things like fire would react if I experimented with same when I was a immature adolescent. Such a curious mindset almost cost me and the adjoining homes in my neighborhood dearly.

As the story goes, I could not help but wonder, at a very young stage in my life, about the effects fire might have on tumbleweeds, especially a large pile of the ghastly things to be sure. So, one day while I was alone at my house with no siblings around to tattle on me, I decided that my boredom had reached a crescendo and looked for an inanimate victim to ply my mischievous wares on. Knowing that my dad had recently cleared our backyard of tumbleweeds in order to build a swimming pool, I let curiosity get the best of me.

So, I grabbed some matches and went over to the pile that was stacked up against the fence in the back corner of the lot. When I struck one of them and tossed it in, I was amazed by the rapidity with which the flames reached full intensity and threatened everything in the vicinity. I mean, up they went like an inferno. Since those big round tumbleweeds were piled on top of each other, the whole conglomeration was completely annihilated.

Scrambling for a curative method to end the holocaust, I snatched a nearby garden hose and poured a furious infusion of water on the fire to save the neighborhood fences, homes, and outbuildings. Up to that point in time, it was the scariest thing I had ever done.

Later on in life, I witnessed my kids satisfy their curious bent about fire in similar fashion. While living in Arizona in a town situated on the outskirts of Phoenix, they had managed to built a small “ugly” fort out of wood scraps near the backyard fence as well. Somehow, it was also full of old newspapers that had no rhyme or reason for being there. Since a chill filled the air on that particular day, they attempted to warm the structure up with a fire that was started inside. Since the newspapers fueled their little escapade, the disheveled fortification went up like a small bonfire and took the fence with it. Fortunately, the Rural Fire Department arrived shortly thereafter to put the explosive situation to rest.

At another point in time, the kids were near some trees that bordered a patio at the back of a house we owned in an outer suburban area of Orange County, California. Santa Ana winds were extremely violent that day and had just obliterated an electric transformer attached to a power pole on a street next to ours. It was somehow connected to the one covered by branches on one of those trees. The destructive force caused the one near us to ignite and catch the branches on fire. I am glad I was there when it happened and able to extinguish the blaze before it reached the structure of the house. That was a scary event indeed!

My Thoughts Regarding Possible Fire Starters

It is not hard to imagine all the ways fires can start. And many times it is in shocking situations.

I watched an incredible shot taken by 2 workers in a camp in Canada. They just happened to be running the video camera on their cell phones when a massive lightning bolt destroyed a very large tree in front of them. It peeled off the bark, demolished the top half of the tree, and the flash exploded around the perimeter like a bomb. There was no fire that resulted from that hit, but there certainly could have been.

Obviously, you don’t even need human carelessness to set everything ablaze. But if you want an example of that type of malfunction, I once watched a video of a gas-fired water heater blowing through a roof when the relief valve failed and caused pressure to build until it exploded. Faulty maintenance of that unit resulted in a fire being created which reduced the house to ashes.

A kitchen mishap, a short-circuit in defective wire inside a wall, or a car in the garage leaking fuel onto a hot engine manifold. Those events will do nicely to create a fiery upheaval. How about an unattended fireplace that spews sparks onto a nearby rug just past the hearth. It just seems like the possibilities are endless.

I lived in one house that had a huge oak tree about 10 feet away heavily scarred by a not-to-distant bolt from the blue. As for the house I live in now, it has a dead tree that is black (and eerie looking) from some type of similar heaven sent disaster.

Some Of My Best Answers For Fire Prevention

I guess I consider myself fortunate that my (our) mishaps were quickly contained. I can’t imagine the hell people go through when everything they own goes up in smoke.

That being said, I think the only things that I could advise are the following:

There, I have said my piece for what it’s worth. I am no saint when it comes to fire protective measures. But I am well aware of the danger, and hope I never have to go through what is happening in California. I think the only thing worse would be hell itself. Amen?