HUNTING FOR SPORT TO ANIMAL ADVOCATE 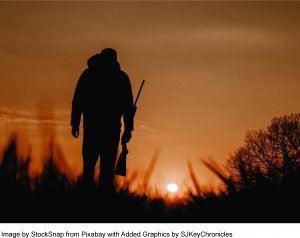 I remember when I lived in California as a youth, I would often go hunting with my dad up to the northern part of the State for game like wild ducks, pheasants, quail and such. For my weapon of choice, he bought me a 4-10 shotgun which could fire only one shell at a time before requiring me to reload. It was a Christmas present and I cherished it, not only because it was my first weapon, but also because he allowed me to have it in the first place.

When we made our trips, they were up near a town called Marysville which had surrounding land suitable for hunting ducks in nearby marshes and also open fields full of pheasant or quail. We also met friends of his up there and this meant lots of booze came along for the ride so they could party afterwards.

One trip was done on the private airplane of California Car Painting Magnate, Earl Sheib, who footed the travel bill and the bar tab as well. It was not my favorite scenario because this meant I would be hunting with a group of men who had been drinking heavily the night before, as well as some who had a few swigs the morning after just before we went on our hunts.

Since all of the men had sixteen gauge shotguns which had the capability to fire three shells before reloading, I felt a little intimidated since my gun could only fire one. Not wanting to be outdone by their wild shooting machinations, I perfected the art of calculating the speed of a duck in relation to the required amount of lead needed ahead of the bird to make my kill. In doing so, I often hit a bird that was missed by 3 or 4 men who were wildly firing at will.

A friend of mine that I often made hunting sojourns with was more set on bagging quail. Doing this exploit in the same general area of the State of California, staying in hotels was not an option. This meant trying to get some shuteye in a sleeping bag while staring at millions of stars overhead. The only redeeming features of that type of camping trip were the cookouts for breakfast and wood fired feasts at night.

Still in possession of my single shot weapon, I had to make all my trigger happy stratagems count. This meant doing crazy maneuvers like gunning down those wily little birds while chasing after them, trying to flush them out of bushes right next to me, or running down a dry riverbed in hot pursuit while firing my weapon. One memorable moment in time, I shot one perched on top of the backside of a horse grazing in a pasture near a fence. I managed to get it without hurting the horse, but it was a crazy stunt nevertheless.

One thing that I didn’t like was hunting with inconsiderate clod hoppers who were not responsible cohorts when it came to chasing down game in an open field. They are the kinds of numbskulls who do not observe the type of etiquette needed when it comes to firing their shotguns. They were more interested in taking down their game at any cost, even if it meant failing to follow proper safety procedures to ensure that other hunters around them were not in harm’s way.

One time, while hunting pheasant with my dad in an open field, another hunter took a shot at a bird in front of us while he was still behind our position. His gunshot could have hit either one of us by the way he carelessly fired his gun. My dad became livid and read him the riot act which almost invited a fight between the two men.

Another time, while going after jackrabbits for sport in the Mohave Desert outside of Los Angeles, California, some acquaintances I was hunting with followed the same thoughtless procedure. I was positioned somewhat ahead of them when they spotted one of the critters. Before I knew it, I had the unfortunate pleasure of hearing a number of 30-06 bullets swishing past my ear trying to take down that varmint. After expressing my displeasure with their mindless tactics, I fumed when they just laughed it off. Needless to say, I never went hunting with them again.

End Of An Era

My final hunting trip was done with those same clowns who felt no compunction about blowing holes in defenseless rabbits with high powered rifles for the fun of it. I had always grown up believing that you should only kill what you planned to eat. Even though I had originally agreed to do the same thing they were doing, I never felt comfortable killing animals that way.

The final blow to my psyche came when I spotted a cottontail bunny sitting on a rock that was scared to move because of all the activity around it. To prove my stupid worth with an inferior weapon on my person I wished to show off what I could do with it, I watched it shiver a bit then turn and look at me with frightened eyes as I took aim. With one pull of the trigger, I splattered it’s poor little body all over the desert floor,  initially content with the aura of the brave hunter that I deemed myself to be.

Afterwards, feeling a deep sense of remorse for what I had done, I decided that I had enough of killing animals and gave consideration to the idea of putting down my weapons for good. Knowing that I had abused the privilege of being able to hunt wild game for the sole purpose of providing food on my table had a lasting effect on me which persists to the present day.

Since then, I did go on a trip or two with my dad, but didn’t kill anything and was not ashamed of my decision to follow my new course of action. As fate would have it, I became more of an animal advocate in the years that followed intent on saving a wild animal more so than ending its life.

We now live in a rural area that brings raccoons, possums, hummingbirds, wild rabbits, and deer to our back door. Apart from feeding them, we will try to save one that is sick or injured by another predator living in the woods surrounding our house. As for my personal misgivings, I don’t have to worry about aforementioned misdeeds bothering my conscience anymore.