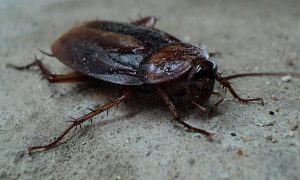 I read an article in NOLA.com , the New Orleans informational site, that stated the following: “This week, New Orleans was named the most cockroach-infested city in the United States”. Yep, when it comes to roach paradise locations, the Crescent City beat out everyone, even Houston, Miami and Atlanta, which ranked No. 2, No. 3 and No. 4 respectively on the rankings by Bloomberg website.”

Since I was born in that city, I can attest to that fact. After my wife and I moved into a brand new apartment building complex in the outlying suburbs, we got a taste of the nasty critters first hand. When I went down to the kitchen late at night, I saw their vile carcasses covering the counter tops. When I spotted them on top of the window curtains and got their attention, they often flew off towards me straight into my face.

When I lived in Southern California, I did one job that involved renovating some houses for 2 investors. During the demolition phase of the project, I opened one of the antiquated wall coverings and had thousands of German cockroaches swarm out all over me. I found this to be more repulsive then the 3 fat-assed black widow spiders I discovered attached to the garage door after I had just opened it nearby. Yuck!

This morning I read an article from Headline Health titled:

The article stated the following:

“A new study by researchers at Purdue University in West Lafayette, Indiana, found evidence that the German cockroach species is becoming harder to kill as the worldwide pest rapidly develops cross-resistance to multiple types of insecticides at one time.

Other findings published in the Scientific Reports Journal stated:

“This is a previously unrealized challenge with cockroaches,” the study’s lead author, Michael Scharf, said. “Cockroaches developing resistance to multiple classes of insecticides at once will make controlling these pests almost impossible with chemicals alone.”

The article goes on to say they have been found in squeaky-clean homes including large upscale mansions. Even though they are walking garbage disposals, you can find them in areas where no food particles exist. I found a mating pair near the ceiling of my just completed closet. No food anywhere in site, just a hangout for cockroach romance.

This is very disconcerting because the critters seem to be everywhere. If they are evolving into an insecticide-proof bug, then I will have to find new ways to battle them. It’s like dealing with an army of secret antagonistic operatives!

Since I live in North Florida, I am finding the problem is just as bad here. The critters have crawled across my neck while I am sleeping in bed. We have installed electronic zappers that send out silent death-ray signals. and even though they manage to cause the critters to flip upside down, they still wind up wiggling their butts off. We have to get a paper towel and squish them before throwing the disgusting wad in the trash. 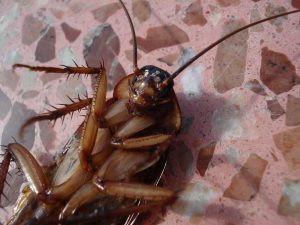 Roach spray spread across suspected openings will often do the trick, but not before they enter the house and expire on our floor. Since we are never sure whether they are still alive or not, we still use the paper towel for disposal.

I have tried spraying the outside foundations of our house, but that has limited effect. I suppose you can hire an exterminator, but after you pay the bill, then what. How long does the chemical last when the rains hit and dilute their efforts.

We have a back bedroom that we have not finished remodeling yet. It is used for my wife’s 2 pet Conures (noisy Parrot-like birds). Even with constant cleaning of spilled food on the floor, it is an ongoing process that draws roaches. Sometimes there are multiple incursions at once. 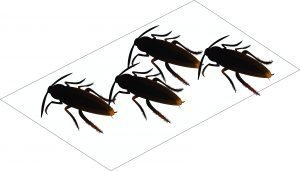 My wife came up with the idea of installing the sticky pest strips that you find in any store and place the flat pads on the floor where you expect the bugs to hang out. The white surface has some type of chemical that attracts the pests so that they are lured on to the top of it and wind up getting stuck until they expire.

We have found that one strip has attracted and captured up to 10 cockroaches in one night. Since she is wary of spraying poison around the birds, this is even a safe solution for her. On top of that, this type of remedy will defeat the Super-Bug conundrum unless the next evolutionary step would be for the gruesome cockroaches to grow sticky-proof stubs on the end of their creepy disease infested legs! Perish the thought!