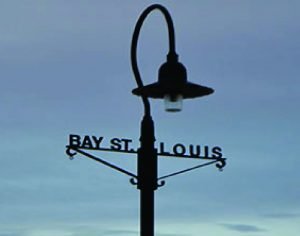 The Town With A Dark Side

Bay St. Louis, Mississippi is a coastal town just east of the Louisiana state line. It is on a large body of water surrounded by attractive waterfront homes. There is a small shopping area, a yacht club, and has an outlet into the Gulf of Mexico. With very picturesque scenery, it is a marvelous place to live. Most of the time!

Situated on St. Louis Bay which has an outlet into the Gulf of Mexico, it is perfectly located as an entry point for any large tropical disturbance along the coast. That scenario finally played out into two big monsters that did more damage than anyone could have imagined. Damage that is still visible to this day.

In 1969, and again in 2005, this coastal area was  center stage for two super-sized hurricanes, Camille and Katrina, respectively. Entire areas were completely wiped out. Even now, there are still scores of empty lots where historic homes once stood. Almost every home there was affected.

My dad’s sister and her husband owned a nice second homes there. It was located just in from the beach road that ran alongside of a stepped seawall. Set back in the woods, it was a nice retreat from their permanent residence located back in New Orleans.

When Camille hit, there was some damage to the outside yard, and such, but the interior escaped its wrath. The towns further down the coast, Gulfport and Biloxi, received the bulk of the destructive impact. Storms that came and went for the next 36 years affected the area somewhat, but nothing major was reported.

Hurricane Katrina changed all that! Along with just about everything else, the house was slammed into by massive tidal surges and it finally crumbled beneath the incredible onslaught. It turned into a pile of rubble. Once having been such a beautiful place for family get togethers, that home is now just a memory. Gone, but not forgotten. Sad to say the least.

Setting The Stage With My Own Event For Disaster!

I mention all this, because the town has another dark side. It seems to have the capacity for luring you into escapades that can threaten your life. This story proved that fact one sunny morning when I least expected anything to happen. But happen it did! And my life has been profoundly affected ever since.

Summertime for a young boy is when he has the best opportunities for wild adventures and certain amounts of mischief. Spending time in Bay St. Louis was something I looked forward to because my parents weren’t around regulating my activities. My aunt’s son, Michael, and I did pretty much what we wanted. We just had to “try” and stay out of trouble.

He was about my age and had is own boat. We would go water skiing on the Bay in the afternoon when the water was smooth made so by the lack of any breeze in the area. One of our tricks was for the driver to get the boat up to maximum speed while the one being towed hung on for life.

When the boat was turned sharply in one direction, the skier would whip around the outside of the wake and release his skis. Making a cannonball, he would then fly into the air and try to ricochet off the surface of the water. Sometimes it worked. But when it didn’t, incredible pain would engulf the unlucky victim. Bruises and red watermarks would cover his body and end further attempts to continue this foolishness. We were fortunate that nether one of us received a broken neck or spine in that mind numbing series of stunts.

Having escaped paralysis with that overzealous exploit, I was still facing dark clouds ahead. It happened with another boat that was used by his parents for family outings. Being a cabin cruiser and much larger than Michael’s, it would hold 8 to 10 people and was perfect for outings on the Bay.

They kept it stored in a boathouse on the Jourdan River which emptied into St. Louis Bay. Access to the boathouse was by way of a county maintained back road covered with loose tiny white clam shells that were dredged from the Gulf. This road became the bane of my existence and has haunted me to this day. 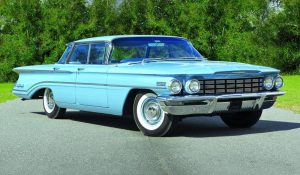 Trips to the boathouse were accomplished via a monstrous 1960 Oldsmobile 4 door sedan like the one shown in the picture above. A really big car, it was used by everyone for shopping, going to the theater, and trips to the boat house. At the time of the “incident”,I was a licensed driver, but my cousin was not. What was about to happen to me, should have happened to him. The irony of the matter was, he was even crazier than me and willing to do anything for kicks!

One unfortunate day, my aunt asked me if I could drive that car to the boathouse and run the bilge pump for the boat to drain water out. The hull was made of wood and there was a slow leak that allowed seepage in. I was happy to do it since I never thought she would let me take that big car out by myself.

So Michael, along with a friend of his who lived across the street, joined me. His friend sat in the front passenger seat and he was in the back surrounded by a bunch of empty glass soda pop bottles. It wasn’t long before we turned that simple trek into a fast joyride.

Once we got cranked up, speeding all the way there was our method of choice, but mostly on paved roads. As we got closer to our destination, the road suddenly transitioned into a shell covered one that had some serious curves in it. To impress my passengers and prove my bravado, I continued my high rate of travel to on top of the loose shell covered road. That was a horrible, horrible mistake!

As we entered a tight sweeping curve in the road, I apparently lost control of the car. I don’t recall what actually happened next. The tree I was sliding towards did not budge when I hit it, and that big Olds was not going to be denied. Bam!

How Is It That I’m  Still Alive?

Within a narrow time frame I slowly awakened to an incredible nightmare. My face was covered with blood and my jaw was smashed to smithereens. Michael was in the backseat cut all to pieces by shattered bottles and in a lot of pain with a broken leg. His friend had been thrown through the front windshield and we thought he was dead.

I had no airbag to protect me when the car hit the tree. The impact caused my head to lurch forward and strike the steering wheel. The force caused it to bend it over double. There were teeth laying in my lap. I was in a complete stupor, but somehow, still alive.

Thankfully, 2 men came by in a truck soon after the accident. I heard one of them say that they were amazed we had survived such a violent crash. One of them said Michael’s friend was on the front hood, but they saw him breathing.

An ambulance was summoned and we were carted off to the local hospital. As the doctors were trying to clear my throat and stomach of blood, I noticed something really weird. My tongue could move my upper palate up and down. I knew then that I was in real trouble.

Being a small town hospital, they could not handle the serious nature of this type of injury to my face and jaw. My grief-stricken mother came down and accompanied me in the long ambulance trip back to New Orleans. I remember not being thrilled with the high-speed rate of travel during the trip, but I had no choice. I was on my way to Southern Baptist hospital which had doctors skilled in the medical procedures necessary to piece my face back together. I realized that the sooner I got there, the  better.

It turned out that several of my teeth had been driven to within fractions of an inch from my eyeballs. My palate had to be sewn back together and jaw wired shut. However, my cousin (with a new cast on his leg) and his friend (with big cuts on his face) survived the ordeal and were okay.

I endured a tragedy that should have ended my life. By the grace of God, I was still alive and breathing. Missing teeth were the long-term result that still affects me to this day. Eating food mixed up in a blender and sucked through a straw was what I had to endure while my face healed itself. After my release from the hospital, I was allowed to recover at that house on the bay. It helped some, but I couldn’t do much there until the wires were removed from my jaw. No fun at all!

I did get to see what was left of the car. The front end was caved in with a 3 foot u-shaped indentation pushing the engine back into the drivers compartment. The steering wheel was bent way over and there was a big hole in the shattered windshield. Blood stains were everywhere. Broken glass bottles had been thrust into the front seat from the back. It was a horrific sight. After seeing this wreck, I was never able to figure out how or why I escaped getting killed by such an unbelievable event.

Well, I guess things sort of changed after that. I wound up spending less and less time there. Future treks to the house were usually family centered events with my parents and siblings and others coming along. My cousin and I being able to take off for some new adventure slowly became a thing of the past. My Dad eventually moved us out to California and future jaunts to the bay were few and far between.

I did return years later in the wake of Hurricane Camille to marry my wife in a small church in town. Later on, I had the honor of spreading my father’s ashes over the waters there. Michael’s sister. Elleen inherited the house when her parents passed away and she became the victim when Katrina ended it all.

I always seemed to think back to the past whenever I pay a visit there. I find myself being reminded of that fateful summer’s day when my life should have been cut short. The car is gone and now there are just trees and an empty lot where a home stood as a one-time staging area for that next adventure. I have old photographs to help bring memories back to life, but it’s just not the same anymore.