LIGHTNING UP YOUR LIFE 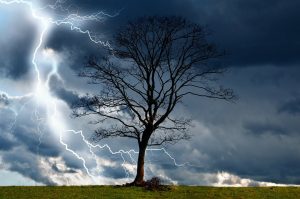 I Was Just Struck By Lightning, Folks!

I used to live in the lightning capital of the United States. The home of Disney World, Orlando (located in “Lightning Alley”) is a virulent hot spot for bolts from above. Any thunderstorm activity will guarantee a multiplicity of strikes throughout the entire area. And the results can be devastating.

Many commercial buildings have lightning rods. At the Orlando International Airport, there are lightning rods on the tarmac (runway). I once saw a strike hit and watched the flashes skip along the ground in the pouring rain. A remarkable sight.

We came home one day to find that our TV, computer, and answer machine had been fried. The culprit was a direct hit by lightning to the house. It caused a massive power surge that must have increased the voltage to our systems exponentially and wiped them out. Unfortunately, we were renting the house and did not have renter’s insurance.

Sometime later, I was working on my wife’s Audi inside our garage in the same house while a storm rumble outside. She, along with her parents, stood off to the side talking to them while I had both hands touching the fenders with the hood open. Keep in mind here, I was inside the garage with the car halfway in, and halfway out.

With no warning, my arms started to vibrate violently and then the force of the action threw me backwards away from the vehicle. Everyone stared at me with a puzzled look on their faces. I glanced back at them and made a profound announcement. I told them that I thought I had just been struck by lightning! It must have hit the wet driveway or the back of the car and traveled forward through the fenders. As a result of that impact, had a vibrating feeling course through my arms and a tingling sensation remained for awhile after that!

Needless to say, I suffered no damage to my body (well, maybe some to my brain). However, just the thought of being struck sends shivers down my spine (No pun intended). If I had been outside for just a moment when it happened, I could have received a fatal hit instead. Wow!

One Person Not So Fortunate As I 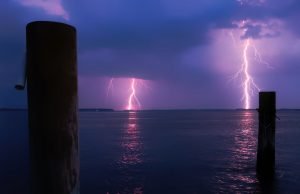 A number of my blogs cover a period of time when I lived in Santa Monica, California. I rented an apartment there and did work for the management company that controlled my complex and other units in the area. As a result, I made acquaintances with all of the residents.

One apartment was occupied by two sisters and their mother. They were originally from New Orleans, Louisiana, my home town. I was able to establish a mutual camaraderie with them, and we shared stories about our place of birth. One of the sisters had a son who still lived in that city and went to school there. The best that I could determine was that the institution was LSUNO. As far as I knew at the time, he was living with his uncle who happened to be with him one dreadfully fatal day.

They loved to go water skiing on Lake Ponchartrain, just outside the city proper. One day, the son stood on a dock waiting for his uncle to come around with the boat and pick him up. There was a threatening sky overhead filled with thunderclouds moving in which caused rain to start falling.

As the boat drew near, a sudden bolt of lightning stuck him dead-on and knocked him into the water. The force of the hit was so strong, it fried his entire body. The stunned uncle responded immediately by diving in to haul him out of the water and discovered the young man was still hot to the touch. He knew then that the unfortunate victim must have felt no pain as death must have been instantaneous.

I found out about the tragedy the next day and tried to visit with the sisters to help soften their grief. But they went into mourning and would not allow any visitors. The boy was the one sister’s only child and she was devastated by the news.

I was watching a series on the Weather Channel about incredible moments that captured direct lightning strikes on video. One of the momentous ones showed two guys in a lodge in Canada (Domaine du lac bryson lake lodge 11 août/august 2017) shooting a video of the grounds outside their cabin. A serious storm loomed overhead and they decided to take a chance and let the camera run.

Their focus was on a huge pine tree next to the camp office building. It looked to be about 80 to 100 feet tall with a massive trunk and large outstretched branches. It was certainly haughty enough to withstand the most severe types of weather events.

As the video ran, a huge flash of light enveloped the tree followed by a giant clap of a thunderous explosion above. The lightning strike blew off the whole top of the tree and the massive section fell straight down on top of the roof of the building and caused a section of it to collapse. A long stretch of missing bark down the side of the tree resulted from the strike and must have been vaporized into thin air.

Another video showed a strike hitting a tree a few yards from a young girl who ran out into the yard during a downpour. She was in a wide open field when it happened and could have been struck instead of the tree.

When we lived in Phoenix, Arizona, my wife and I were driving one night when a summer storm rolled in. As it gained strength, we began to observe lightning strikes all around us. One incredible flash struck a transformer off in the distance the explosive force generated resembled the glare you might get when looking directly at the sun. It was like the War Of The Worlds was playing out right before our eyes, and we made an auspicious comparison to that iconic movie right then and there.

I had a friend that I worked with in Arizona who was trimming a tree one day when a rare thunderstorm moved in. He was hit when a bolt struck the tree he was in. After being thrown clear onto the ground, he became temporarily paralyzed and couldn’t move. He said his arms and legs had burn marks which evidenced the near-fatal catastrophe. He lived to tell the tale, but I think his brain was affected somewhat after that.

Since I moved to the country, I have experienced thunderous sounds like nothing I heard in the city. The noise echoes throughout the forest trees and shakes the house when the big ones hit nearby

Our house has its own pole mounted transformer supplying electricity and is very susceptible to a direct hit. It is sort of out in the open next to the dirt road and very high in the air. If it gets blown apart by a direct hit, we are doomed until the power company can replace it. 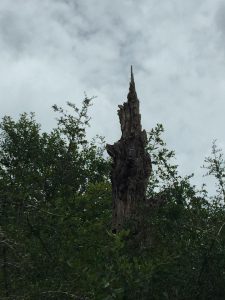 If you think I am being paranoid with all this, let me spout forth a reason for my concerns. We have a tall dead tree stump about 50 feet high. It is charred black with no branches stretching out from its dark edifice. I believe it was hit by lightning at some past moment in time and was instantly terminated. It may even have caught fire and the charcoal appearance gives evidence of that possibility.

We live in a hot zone for violent weather activity. Fronts moving through the Southeastern part of the US first sweep through Louisiana, Mississippi, and Alabama before reaching us. As a result of that activity, tornadoes often develop in those states before the commensurate threats reach our area. Lightning becomes a very loud and troublesome part of those events and I do not go outside when they pass through.

I have written blogs giving my thoughts on how to deal with hurricanes, snow storms, and flash floods. All of those events allow time to prepare because you get warnings ahead of time. Not so with a lightning strike. As a result, I learned the following things regarding these events:

I suppose you can do what you want. You may not feel a thing when a bolt from the clouds ends your life. It may even be the perfect way to die instantaneously and have no feeling of pain afterwards. Just don’t expect me to share your morbid thought patterns. I would hate to be struck and still be alive afterwards encumbered by burn marks and brain damage to look forward to for the rest of my life. No thanks, I’ll just simply pass on that idea!