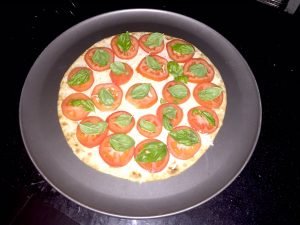 Since both my wife and I are not pizza lovers, per se, we do not go to restaurants that specifically center their menus around the incredibly popular offering known as ‘Pizza’, but that scenario changed when we lived in Mandeville, Louisiana, a city located just north of New Orleans. A friend of my wife recommended a restaurant called Isabella’s Pizzeria, and so one Sunday after church we gave it a shot. We were not interested in the typical Pepperoni and Tomato Sauce with added Toppings choices, but did notice one item on the menu in the gourmet section called Margherita Pizza that had an interesting selection of toppings. Starting with a  base layer of shredded Mozzarella cheese on a thin crust, it was then covered with sliced fresh tomatoes and finished off with garden grown fresh basil leaves. So, we ordered the 16″ size since there were 3 in our party which included my wife’s mom who lived with us at the time. Along with side salads and some bread sticks, we found that it was a very delicious meal. It also was filling, devoid of greasy toppings that sat on top of acidic tomato sauce, and seemed like a healthy substitute for what would normally be a gut wrenching meal for us.

Upon leaving the area and returning to Florida, we tried to find that particular style of pizza in Italian Restaurants and local Pizzerias to no avail. Almost all of them never even heard of that pizza, and the one’s that did produced an absolutely inferior product. I tried a joint in New Jersey one Christmas when we went to visit our son and his wife in upstate New York, but it had spot globs of mozzarella at stated intervals on its version, and little taste worthy pizzazz at all. Anthony’s Coal Fired Pizza Restaurant in Ft. Lauderdale has a pizza called the Caprese, which has the right ingredients, but without any of the commensurate flavor to match Isabella’s. Where we live now, I’ve checked Dominoes, Pizza Hut, and a family owned Italian Restaurant in the area with no success. Some have a spinach concoction with a different kind of cheese, but it’s not even close. 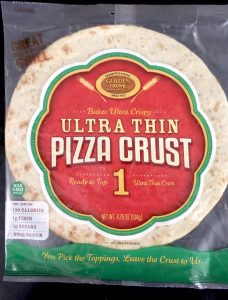 My wife likes to stop at the local Dollar Tree Store for things like everyday dishes, glassware, certain food items and such. The first time she went there, she spotted a pizza crust product made by a company called Golden Home selling for $1 per package. It has a thin crust, 130 calories, 1g fiber, 1g sugars, and 80mg sodium per slice. When she asked me if I thought it was worth a try, I was skeptical at first because it didn’t look like much. However, at a dollar a shot, I figured I could humor her by agreeing to get one and just throw it in the trash after we put the stupid product to the test. When I decided to make my first Margherita Pizza with this pizza crust it was on a Sunday evening, a time in the week when neither one of us feels like making a full blown dinner. So, I removed the 12″ crust from the package shown in the picture above and placed it on a 16″ pizza pan. Then I heated a pizza stone in the oven at 350 degrees. Next I took a bag of shredded Mozzarella Cheese and sprinkled it on top of the crust until there was an even layer out to within a half inch of the edge. I followed that up by taking two large Roma Tomatoes and slicing them up before arranging them in a large circular pattern on top of the cheese. While I was doing that, my wife went out and cut some fresh basil we had growing in a planter in the front yard. When she brought it back, I took kitchen scissors and cut the stems loose, saving the leaves only. Then I placed 1 leaf on each slice of tomato. By doing this, I made sure the basil enhanced the flavor of each tomato slice with the cheese serving as a base.

I then took a big wide spatula and scooted it under the completed pizza and eased it unto the hot pizza stone in the oven from the pizza pan. After 8 minutes, I checked it and saw that the edges were getting crispy.  I opened the oven door, slid the oven rack out with oven mitts, and carefully worked the large spatula under the pizza and rotated it back onto the pizza pan after working a few stuck areas of the crust loose with a long bread knife. Then I cut the pizza into 6 slices. When I tasted my creation, I was amazed. It was delicious and the crust was nice and crispy and had flavor as well. Since then, this meal has been a regular Sunday Night feast for us and goes well with a simple salad made with Iceberg Lettuce, Chopped Tomatoes, Chick Peas, and Red Onions doused with our favorite Italian Dressing. Magnifico! 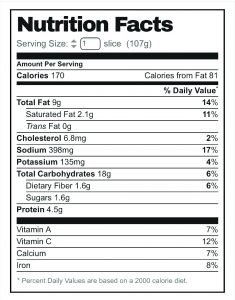 This homemade pizza is a healthy alternative to the calorie loaded fat laden pizzas found in restaurants and the frozen food section of supermarkets. It is also quite inexpensive to prepare. A typical frozen Red Baron Pizza has 495 calories per slice. A California Kitchens Margherita Pizza costs around $10, and I have to add tomatoes and such to make it a meal. My whole pizza has far less calories and costs about $4 to make. You do the math. 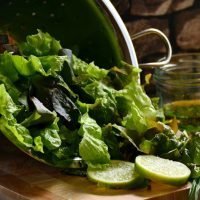 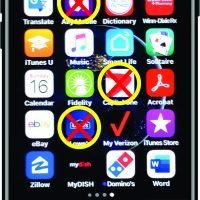