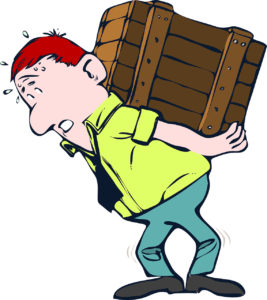 Moving In With A Surprise In Store

For a contractor, or any tradesman, moving out of one residence to another is a daunting task. You have the home furnishings, tools, equipment, trailers, you name it. Add a few nightmare scenarios, and there goes the apple cart. Something always goes wrong.

My first pre-move trip at the beginning of this current house swapping adventure was designed to kill 2 birds with one stone. I brought my utility trailer so that I could take some furniture along with me as well as haul off demolition debris while there. When I arrived, I found a few surprising scenarios waiting in the wings.

While I stayed in a hotel, my daughter and her husband joined me after completing their trip in from Albuquerque. New Mexico. Since the house had no definitive amenities that I knew of, I was reluctant to sleep there, but they said it would be no problem for them. So, the next day, they packed up their bags and moved in for the duration of their stay.

When we pulled in the next day with our gear, we discovered a major problem. No water! When we went down to the well pump house, we found another electric meter on its own pole next to the storage shed. And it was not turned on even though it should have been.

So I pulled the meter and removed the plastic tabs on the connector lugs to make it functional. I knew this would make the electric company unhappy, but I had previously requested power to be turned on in my name for the property, and it was their responsibility to do so, no matter how many meters you have. Well that maneuver did activate the water pump, but the infraction stirred up my relationship with them later on.

This is Part 8 in the BUDGETHOUSE RENOVATOR series that involves the search for, location of, and unique auction-style purchase of my home in the country. The series includes dealing with a foreign based auction house and escrow to help facilitate this transaction. Also, I show how I worked with a mortgage company programmed to process the “specialized” FHA 203k Program rehabilitation loans. My loan included funds to buy “and” repair my house. Part 7 is about dealing with escrow problems after it is started. My next article in Part 9 is entitled “Moving In _More Adventures“. It will further expand on moving and initial renovation steps with some unexpected events.

Since this was my first time inside the house, one of the initial things I did was check everything inside. I already knew the roof was missing some metal panels, but the ceiling inspection revealed 4 leaks. The previous owner had a maintenance person cut out sections of drywall to let rain water drip onto the floor, so that was the first issue that needed attention.

The next major item was the breaker panel wiring which looked like a bundle of poorly organized spaghetti and needed to be redone. Following that discovery, I noticed that all the ugly vinyl floor ties were in bad shape and many of them were coming loose. A trip into the kitchen area made me realize that there really wasn’t one. I saw the worst example of home built cabinetry ever made and a droopy fan hanging down that was unsalvageable. The guest bath was U-G-L-Y and the master bedroom walls were covered by 1/4 plywood panels which were falling off. Whew!

Before going one step further, I checked all the plumbing for leaks and functionality. The house had been winterized 4 years earlier, so I knew that the water heater would have to be rebuilt. The sink faucets were clogged and the guest bath toilet was inoperable as was the shower in the tub.

The water well pump was now working properly and I later learned from the fellow that tested it that he had rebuilt it 6 years earlier. When he told me that, I realized it had very little use before the house went into foreclosure. However, turning it on gave rise to water shooting out of the only outside spigot on the property and it was broken.

I spent most of the first trip fixing necessary plumbing issues and straightening out the wires in the breaker panel. My daughter (Susan) mowed the lawn (1 acre of grass and weeds) with a walk behind power mower. Her husband repaired outlets and light fixtures.

To top it all off, those two had their own problems. While making the long trip, the alternator in their Land Rover decided to quit and the battery went dead. At the hotel, we got their vehicle started with a portable battery booster and attempted to use it to keep the vehicle running. In doing so, we travelled the main highway through town to reach a repair shop. On the way, the vehicle quit running again and blocked highway traffic. A police officer finally stepped up and pushed the stricken vehicle into a repair facility while breaking their rear bumper in the process.

We did have fun on the side though. Day trips to the beach, a state park, and a spring fed swimming pond filled out our days after the work was done. Fireflies, bats, and crickets entertained us at night. The concept of living in a country environment was starting to manifest itself.

After surviving that first sojourn, I made another trip by myself. This time I brought ladders, sofas, chairs, tools, and what not. It was the Labor Day weekend and I wanted to start removing the old floor tiles. I also located a local metal roofing fabricator about 12 miles from the house. I had them make the missing roof panels while I worked on demolition.

The whole house was filled with nasty-looking one foot square vinyl floor tiles. There were maybe 1800 pieces in all and I needed a plan of action for the demo work. Even though I had a floor scraper, I did not see myself continually bending over or getting on my knees to do the job. Since I had no helper, I got creative.

After purchasing a heavy-duty trash can, I included a bottom roller attachment as part of the deal. The chairs I brought were for a dinette set and also had wheels. While sitting in the chair and placing the trash can within reach, I scraped up 3 or 4 tiles at a time. I then lifted them carefully up and into the trash can. I had placed a contractors trash bag in the can so I could bag them up for placement on the utility trailer to be taken to the local landfill.

I got all of those pesky tiles up and made the house ready for new flooring to be installed on the next trip. My wife and I arranged for the Lowe’s in Ft. Lauderdale to order the Pergo Flooring and have it delivered to the Lowe’s at Defuniak Springs, 4 miles from the new house. We then brought the utility trailer up with more furniture and tools a few weeks later. After unloading everything, we went and picked up the new flooring.

When we made the next trip, the water meter electric supply issue problem resurfaced and caught us off guard. Since electric meters are digital now, they can be read by computer from a centralized station. With this capability, the power company took note and zeroed in on the fact we had tampered with the device and shut it off again..

In confronting them, they threatened to penalize me $3,000 for activating it. I told them I had asked for the power to be turned on legitimately. It seems they had never updated their records to reflect the fact that two formerly separate properties were now listed as one entity by the tax appraiser.

They finally backed down from the penalty situation, but still wanted $350 to reactivate that rusted out and barely usable add-on power meter. When I heard that, I told them to pull it off of my property and that I would run my own power line underground from the house to the water pump. So my wife and I spent that entire visit digging a trench and running #6 heavy-duty wiring through conduit from the house breaker panel to the underside of the house. Then we laid the wire filled conduit in the trench and ran it out to the pump shed.

In planning and thinking ahead, I installed an outdoor electric subpanel breaker box at the hook-up point in front of the well. One Breaker was for the pump. Another was for a GFI outlet at the well house. A third one was set up a future 30 amp outlet for an RV hookup and power to the outbuilding where the RV would be parked.

We now had eliminated the expense of running a second meter and could control the pump from the house when doing plumbing repairs. It was a lot of work but well worth the trouble. The wire used would validate the actual requirements needed later on.

Installing The Flooring Before Being Hit With A Catastrophe

Another trip with more tools and furniture centered around the installation of the Pergo flooring system which turned into a nice endeavor. We first laid down the approved foil-covered pads that the flooring was designed to “float” on top of. The panels unfold and lay down flat with no adhesive or nails needed. It also rides over small imperfections in the sub-flooring.

Then I started laying down and assembling the 6″ x 60″ flooring boards which conveniently clipped together. You set them by using a rubber mallet and special tapping block we bought at Lowe’s. A chop saw and wall tool was all of the rest of equipment we needed and the pieces went down fast. We covered a 400 square foot living room, a 240 square foot bedroom, and got started on part of the hallway. All this was accomplished within in a couple of days. No adhesive, no nails, no creaking, and no movement. Perfect.

Unfortunately, disaster struck before we could finish. Near the end of this escapade, we began to realize that all communication with my wife’s 90-year-old mother back home was zilch. After dinner, we contacted the Ft. Lauderdale police department and a locksmith. They went out to her apartment and first informed us they could not find her.

Finally, one officer looked in the bathtub and found her lying there. She had been in that tub for a full day and could not get up. It turns out that after using the toilet, she passed out and fell over into the tub which was next to her. They called the paramedics and she was taken to the hospital.

We were 575 miles away, but we decided to sleep in the house that night and head back very early the next day. We were tired from working and needed some rest. It cut our planned floor installation time down, but that is the way it goes.

It gets worse in the next blog. I don’t know why our moving machinations are filled with so much adventurous happenings, but they always are. It will be Part 9 and is entitled “Moving In _More Adventures”.