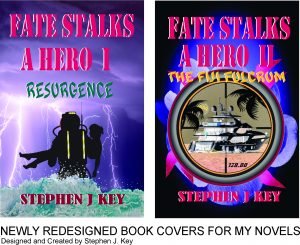 Reviewing The Inspiration For My Story Line(s)

In my previous LEARNING TO WRITE article Learning To Write:My First Novel Part II, I told of how I have always been fascinated by the Navy SEAL Team’s enigmatic aura. When we visited their dedicated Museum in Ft. Pierce, we got to see the Maersk Alabama cargo ship life boat that held the ship’s captain hostage while being driven away by Somali pirates. The movie that depicts the document drama, Captain Phillips, was quite revealing and did incorporate maneuvers by SEAL Team marksmen that help to highlight scenes in my book. The 6 to 7 very difficult shots by Seal team snipers ended the lives of the 3 pirates while engaging them in rough waters. The end result was that the ship captain’s life was spared.

I alluded to how my dreams included similar scenarios with my involvement scribbled into the plot. I don’t know why, but I didn’t do anything to foster those illusory nighttime tales. Maybe my thought patterns were focused in such a way that my apparitions caused me to experience tall tales first hand.

Anyway, I decided to make a former Navy SEAL Team member the protagonist for my novel. He had to have characteristics that defied logic, almost superhuman to be exact. In other words a “Super Seal”!

He had to possess uncanny attributes in physical stature, stamina, mental acuity, and tactical capabilities. In other words, he became an icon while serving as a superlative operative.

Synopsis Of The Plot Of FATE STALKS A HERO I: RESURGENCE

My convoluted story creation plan developed characters and their own identities as I wrote. Apart from the protagonist, or main character, sub-characters have risen up to be heard.

A childhood friend was the first co-star. An attractive and intelligent wife appeared immediately in the first chapter. A former partner in the service hinted at some intriguing plot destined to develop as soon as he entered the picture. No planning for him, just popped into view.

Antagonistic colleagues, a feisty daughter, and a discarded fiancé groomed for stardom twisted the plot and morphed the story towards a potentially catastrophic conclusion. An unexpected sexy, femme fatale impostor became a critical embellishment to keep things in check.

What I have done is the create a story that even I would want to read. And I don’t like to read fiction. I can count on one hand the number of novels I have read through, and those included directives from my English teachers in school.

The Sequel: FATE STALKS A HERO II: THE FIJI FULCRUM

The sequel, FATE STALKS A HERO II:THE FIJI FULCRUM is even better. But you need to read FATE STALKS A HERO:RESURGENCE first, because it ends with the tag line “To Be Continued”. A last-minute plan for the protagonist to whisk his beleaguered wife off to her favorite vacation spot of choice, the island of Fiji. The island group becomes the setting for the appearance of an alluring mysterious woman who unintentionally draws the couple into a perilous adventure fit only for active members of the Navy SEALs combat warriors.

The characters include a missing husband, his renegade brother, a subversive war lord and a Cajun operative. The plot all comes together with several horrific scenarios. You need to have a stomach for the anti climax and compassion for the hero and his cohorts as they work their way through a convoluted finale.

I wrote the first novel for people who don’t like to read books. I wrote the sequel for people who hate to read anything but find the plot compelling enough to allow themselves to be drawn into the story lines and want to take it all the way to the end. You are the ones that give me the type of comments that encourage me to write more engrossing dialogue to help and inspire you going forward.