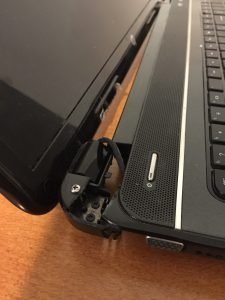 My son Eric, who used to own a computer repair shop in Canton, New York, headed up the acquisition of a new laptop computer for me in the year 2010, and I have been using it for the last 10 years. He was able to get a good deal for me for about $700 back then. The only major improvements he made to it in that span of time was to upgrade the RAM and Hard Drive when the original parts became obsolete.

The last upgrade included a 1 Terabyte Solid State Hard Drive, a new cooling fan, and replacement of the bottom case of the computer. It was starting to crack more and more every time I lifted the cover to open it which put stress on the hinged rear left corner section of the laptop.

Since the durability of the case had been in question for some time, I installed mini bolts through the back top corners of keyboard panel (see photo). This kept the panel from flexing, caused by the pressure exerted from the stiff hinges each time the top was closed. The closing procedure did not cause the same type of stress.

A few weeks ago, I noticed the replacement bottom case starting to crack so much that the whole corner broke off. Since the internal functionality of the computer itself was working fine, I tried to live with it by holding the broken piece tight against the bulk of the bottom case each time it was closed.

Finally, a week ago, the top itself sheared off as well exposing a data wire leading into the monitor. When I tried to find the bottom replacement case part online, no problem. It was available from several sources. However, the newly fractured top which holds the keyboard was not available.

Even if it was, the only options available came from China, and the wait would have been 2 to 3 weeks. By then, I was looking at the possibility of having critical wires chopped off by the damaging action of the broken pieces.

So I had to give up on the old bird and explore my options. Since I am retired now, and not flush with cash like I was in my working days, I needed to minimize my cost outlay for a replacement.

An Online Seller To The Rescue

As soon as I discussed my situation with Eric, he went on eBay and found someone who was selling a similar computer that wasn’t near as old as mine for $150.00. He saw no physical defects on the computer case when viewing the online pics up close, so he went ahead and purchased it for me..

Then he had it shipped to him via FedEx ground so that he could inspect the condition in person and determine functioning capabilities of said unit. In so doing, he found i to be in pristine condition and taken care of very well by the previous owner.

Since my Hard Drive was a 1 Terabyte Unit and would fit nicely in the replacement computer, I pulled it out of the old laptop and sent it to him along with the RAM chips inside. He figured those compatible devices would give me an extra 6G of Random Access Memory when he added them to the other existing RAM chip already attached to the replacement laptop. That procedure would boost my internal memory capacity to 8G of RAM.

When he got the Hard Drive I sent him, he installed it, along with the RAM chips, and then used his computer expertise to reconfigure the whole setup.

With shipping charges included, the whole setup cost me $267. This is a far cry from the $700 to $900 cost of a new computer with similar features, sans a 1 Terabyte Hard Drive.

Since my life is now buried inside that hard drive with the addition of my blog and novel writing exploits, I was down for about a week or so and entirely dependent on  my mobile electronic devices for support. For this blog, I used my iPad to create the rough draft and figured I would do the final edit on the replacement laptop when he finished up and sent it back.

Since I was able to complete the first revision of my latest novel just before I disassembled the old unit, I got everything done in the nick of time on a late Friday afternoon. I then pushed the envelope by getting to the UPS Store a half hour before the delivery driver was scheduled to pickup the weekend shipments going out.

For some strange reason, I have a bad habit of cutting things close all the time. Eric had already received the replacement computer and was waiting for me to get my stuff to him so he could get it all together. I almost missed the cutoff for him to get the necessary components in a timely manner. Some things never change, I guess. Phew!

When I got the new computer back from him about a week and a half later, it looked great and booted right up. After I reconnected it to the internet, everything was good to go. It even has a beefier case that wont break easily like the last one. Voila!