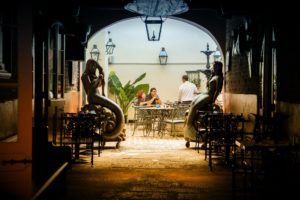 Our Nostalgic House On St. Charles

St. Charles Avenue is the iconic location for upper class mansions owned by old line New Orleans families. At least that is the way I have always perceived it to be. Street cars, stately edifices, and buckled tree lined sidewalks are coupled together with the sounds of the night make for wistful memories of days gone by.

I remember the large family home at the corner of Short Street which was a block from the Mississippi River levee. It had a front porch whereby you could listen to the cars in the rain and gaze out at a nearby tavern with an oval front door reflecting its lights on the wet pavement.

The house had stately rooms full of artistic decorations and paneled walls with chandeliers hanging down. Meals were prepared by the servants and cooks in a large white tiled kitchen populated by stainless steel countertops and commercial appliances. A big glass door refrigerator was stocked with Barq’s Root beer. As an added bonus, my grandparents spoiled me when I was a tyke and let me have anything I wanted in that place. 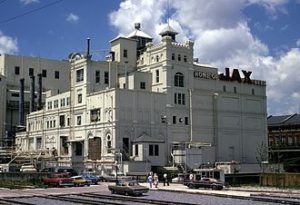 I was a teenager back in the days when no one asked for your ID in the local bars in New Orleans proper. Lying to the bartender would produce the desired result of them believing me and I didn’t do anything to make them suspect otherwise. With my father sitting next to me, he didn’t either.

I was a member of a family known as the Fabachers. They owned a local brewery that had become a hallmark of the riverfront scene by the French Quarter for decades.

Jax Brewery is well-known for its landmark history and impact on the local genre. My uncle, John, was the treasurer there and allowed me to have a summertime job in the accounting office at the age of 14.

I remember looking through the windows at the large beer processing tanks and having scrambled egg sandwiches washed down with a bottle of Jax Beer. While I imbibed, nobody blinked an eye at my doings.

Malts At The Fountain Counter

Katz & Besthoff was the long-standing local drug store icon situated at various locations throughout the city. They also featured a soda fountain lunch counter that I used as a hangout. 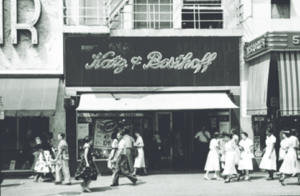 My uncle and I would sometimes go over to the one near the brewery and have lunch. I loved ordering their delicious chocolate malts served with a large tapered glass and a stainless steel goblet filled with K&B’s signature ice cream. Scrambled egg sandwiches seemed to be his favorite choice, so even there I complied with his wishes and made that fare our combo lunch of choice.

The store chain has now been replaced. The purple and white signs no longer dot the city. But I miss them just the same.

Ye Old College Inn was another favorite. I would wear my Dad’s Tulane University football sweater for fun when I went there with high school friends or dates. I didn’t really care that I got a lot of looks. All I really wanted was to have one of their own big chocolate malts and a really good “ground in-house” hamburger for my meal. It is still there today with my Father’s Jesuit High football picture on the wall.

Mardi Gras And The Truck Parade

One of the big events on the actual day of the Mardi Gras celebration was the decorated trucks that carried revelers behind the main King Rex parade. Scores of the pseudo “floats” would keep the action going by supplementing the event after it passed and join in with the festivities. Costumed participants then tossed the beads and trinkets they had in their stashes to the waiting crowds lining the parade route.

Our family became part of a group that commandeered one of these festive vehicles. They rented a semi with an open cargo carrier and did their own decorations. I didn’t get involved in that chore myself, but was happy to jump on board when the magical day arrived.

I somehow always seemed to be responsible for buying my own stuff and really couldn’t afford much at the time. I would save my money up until a few days before the event, then I would visit one of the supply houses and purchase what I could. When everything was ready, we would donn our suffocating costumes, ride in the truck to the starting point, then toss various items to the crazy people in the street below as our part of the parade began.

The only way I could keep from running out of my stash was to tie the beads to a big rubber band. I would toss the trinkets to outstretched hands and let the rubber band return the gems back to me before any street urchins could grab them. Kind of a mean trick, but I did eventually let various items go into the crowds as the parade advanced onward.

A major treat that is indigenous to New Orleans cuisine is a giant sandwich called the Muffuletta. It is approximately 9″ in diameter filled with ham, turkey, and prosciutto seasoned with an olive dressing. The sucker is so big, it feeds 4 people, or in my wife’s case, provides 4 meals for her, and her only. Needless to say, she loves the things.

As an adjunct to this sandwich, my father started a restaurant called the Elephant Bun. The name was taken from its signature offering that was similar to the Muffuletta. I don’t remember who the chef was there, but the food was excellent. Along with this very large sandwich, the fried chicken was to die for.

Again, I was in my early years at high school and underage for obtains no regular employment there. In any event, I was somehow put in charge of the cash register and collecting money from the clientele. Since the manager was stealing money from my dad when he wasn’t there, I knew the enterprise would have a short life span, and that is exactly what happened.

At the same time, he also had another restaurant called the Key Club located on St. Charles Ave. Everyone was stealing from him in that place too. The cooks and servants would hide whole frozen turkeys and steaks in trash cans in the back alley and retrieve the items after dark. It didn’t take long for that restaurant to go out of business as well. What a shame, because the food as a whole was delicious.

I loved hanging out in the French Quarter when I had nothing else to do. Wanting to pursue a career in art at the time, I would often wander through the streets in the shadow of  St. Louis Cathedral admiring paintings done by local artists in Jackson Square.

I also frequented narrow streets nearby filled with local shops where I discovered indigenous items I had never seen before. Voodoo parlors, hole in the wall restaurants serving Creole food, and dark taverns occupied by mysterious characters, to name a few.

Quite often, the smell of fresh French Bread being made by a local bakery filled the air. One the aroma hit me, I would be enticed to seek out a restaurant serving the famous local delicacy know as the ‘Poboy‘ submarine style sandwich. 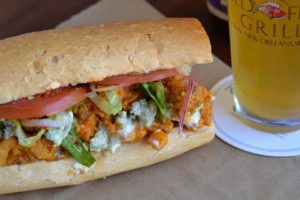 My two favorites were the fried oysters version served with Remoulade sauce and the roast beef drenched in an incredibly delicious gravy. That was the pinnacle of sandwich-based gustatorial delights for me.

Schwegmann’s was the precursor of today’s all inclusive supermarket. It was an over sized shopping complex under one roof. You could not only buy an unlimited supply of groceries, but get your shoes shined, eat boiled shrimp, and shop for unrelated items in one place.

I remember the one I went to as being cold inside. Almost like a big refrigerator. You could grab an oyster loaf and a beer at the in-house Shopper’s Bar to carry down the isles while filling your cart with just about everything imaginable. It was an unbelievable experience.

Another landmark was Morrison’s Cafeteria. Truly delicious comfort food was all made on the premises daily. My mom loved taking us there and gave us permission to choose anything we wanted. That included Crawfish Etouffee, Red Beans and Rice, Banana Pudding, Gumbo, Loss Bread, Chowders, Bisques, and Homemade Soups.

On the flip side, my mother’s father would gather his grand kids and take them to Brown’s Velvet Dairy in the Central Business District to get the most delicious ice cream ever. Back then it was all natural ingredients and had the sweetest flavor. I was only allowed one cone per visit, but always wrangled ways to get more. I had to hope one of my siblings or cousins would not finish theirs and give it to me.

I saw New Orleans through the eyes of a child and teenager. The city was wide open to me back then. I sought the sights and landmarks like an adventurous explorer. Later I did it with my wife who embraced the city as her own the moment she first laid eyes on it.

It’s not the same now. It has changed a lot since I was a young man. Many old landmarks and indigenous structures are gone now. Historical landmarks there seem to be disappearing little by little. Time marches on as do the people who made it all happen.

Nostalgia and memories linger on, however. Long time residents often bring days gone by back to life with personal commentaries, saved photographs, and personal insights decorated with a tale or two. I hope I have done that here. It sometimes makes me wish I could go back in time, at least for a short while, and take it all in once again.