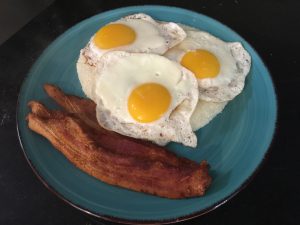 One of my all-time favorite movies is “My Cousin Vinnie“. I love the scene where Joe Pesci goes into a small Alabama diner with Marisa Tomei and asks the chef what a “grit” is. He describes “grits” to Pesci and the staid New Yorker receives his first lesson on the main ingredient in a classic Southern staple.

Our son Eric lives in upstate New York and he loves grits as much as I do. Since the food item is not a grocery store staple in his neck of the woods, he had to ask the local store manager to stock it for him. Ever since his request was honored by that man in charge, he has become one happy camper.

I remember when my car broke down in east Texas (Trouble In Texas) and a local gas station operator towed me to his establishment in the town of Winnie. He invited me to have breakfast with his family and I was amazed to find they were serving those ” grits” just the way I like them. When he took his fried eggs and mashed them into the grits along with a glob of butter, I felt right at home. Needless to say, I didn’t have to apologize when I followed suit and did the same.

So What Is It?

Grits is a food made from a dish of boiled cornmeal. Hominy grits are a type of grits made from hominy – corn that has been treated with an alkali in a process called nixtamalization with the pericarp removed.

If all that sounds complicated, it is simply a coarse ground white corn meal type food that mixes with water to form a popular dish served different ways in the South. It is now available almost everywhere except maybe the North Eastern part of the United States.

The dish is served mainly for breakfast with fried eggs and an additional side dish such as hash brown potatoes or bacon or sausage. The favorite method of eating grits is chopping fried eggs into them with lots of butter and some salt.

What I Do For A Perfect Grits Breakfast

I take one quarter cup of the grit mixture and add it to slightly less than 1 cup of boiling water. Then I throw a half stick of real creamery butter in with a little salt, lower the heat to a simmer, and cook for about 10 minutes with the pot covered. I then keep checking the progress by stirring often.

When they are done, they will have a firm but not stiff texture. Meanwhile, I cook either breakfast sausage or thick sliced bacon on an electric griddle. When they are done, I take them off and set aside on a warming plate. I then keep the grease left and spread it around with added butter.

Then, when the grits are almost done, I fry some eggs, sunny side up, on medium heat. Then I remove the grits from the pot onto a dinner plate, and lay one or two (sometimes 3) fried eggs on top. After adding some bacon or sausage to the meal, I sit down to enjoy by cutting up the eggs and mixing them into the grits. Yum!

Some Other Popular Meals With Grits

The basic breakfast meal above can easily top 1000 calories. If you are watching your weight blossom, you have to exercise portion control. A pile of the stuff with 2 eggs and breakfast sauce or hash browns can break the diet bank.

I recently had a Fiesta Omelet with a bowl of grits and a big serving of hash browns along with 2 slices of toast and jelly including orange juice at the Waffle House. I also finished half of my wife’s ham and cheese omelet and her potatoes. When I figured the damage later on my diet chart, the number hit 1113 calories. I am embarrassed to say that I got sick that evening and moaned all night. Yikes!

I didn’t even have breakfast the next day and waited until 4:00 pm to partake of my first meal. I am finding out I can’t over eat like I used to and avoid stomach wrenching pain later. That’s too bad, because I love grits and wish I could have them more often. Oh well, so much for my being fat!