THE WARPED WISDOM OF MEIN ONE SON: THE BB KING SHAKES AND BAKES 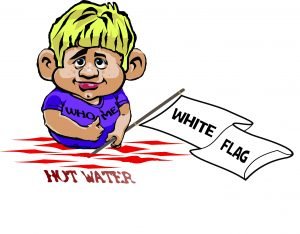 This story was submitted by our son Eric Key. SJKeyChronicles.com does not condone any of his shenanigans carried out as a youthful misfit. Fortunately he has morphed into a respectable human being having put his misadventures behind him.

My name is Eric Key and I must point out one thing as I begin this convoluted tale of mine. In today’s day and age, we are seeing more confrontations and disrespect towards our law enforcement officers. For the record, yes, I am pro-cop.  I’m not sure whether it’s the small town wisdom that I’ve acquired over the years, or my own past experiences that I harken back to, but I have gained some insights with the passage of time. I’ve come to understand that our dedicated peacekeepers have to deal with the bad side of people, so that we as a community can enjoy the rewards of being good.  Sometimes we tend to misunderstand or misinterpret that mantra and automatically view them as villains who would seek to inhibit our Rights to Life, Liberty, and the pursuit of Happiness.

However, I didn’t always feel this way.  On quite a number of occasions, I found myself on the wrong side of the law, been in handcuffs, and on one occasion, found myself in front of more police-issued weapons than I could count.  With that said, I want to recount  one particular incident.

In the summer of 1991, I was living in the high desert town of 29 Palms, California.  Those of you who might not be familiar with this area might have at least heard of Joshua Tree, a neighboring  community just down the road.  During summer afternoons, the temperatures often rose above 120.  The air got so hot, you didn’t dare walk around without shoes because the searing asphalt would scorch your feet. On days like that, you looked for ways to break the spell of boredom.

My 20 Something friend, John, had saved up enough money to purchase a BB gun at a Kmart Store located in the surrounding area of Yucca Valley.  What made this fearsome projectile flinger special was that it was a full-blown rifle with the added feature of a scope attached. This noteworthy point will play a significant role in the story here on out.

As the adventure begins, the two of us agreed to meet another friend for lunch at Kmart, then proceed with our ‘plan of attack’ from there. We went in, he purchased his BB Rifle, then returned to his car in the parking lot with me in tow. We wanted to examine the item in the comfort of an airconditioned vehicle cooled to the max so that we could avoid handling it in blistering heat outside .

While ‘innocently’ hanging out, John decided to inspect his new treasure. With said assault weapon partly assembled, he wanted to check out the scope.  So, he raised it to eye level and looked through the crosshairs at telephone poles, parked cars, and girls in a hair salon nearby, as well as other miscellaneous ‘targets’ ready to be “taken out”.

Even though ‘holed up’ in a super-cooled ‘bunker’, we found it to be still too warm and thus made a ‘tactical error’. Not having hooked up with our friend yet, and thinking there might be a problem with miscommunication, we decided to go back into Kmart to look for him. After spending about 20 minutes inside the store, and not finding him there, we proceeded to make our way back out to the car.

As we exited through the glass doors, we saw multiple police cars, all with their lights flashing, and more law enforcement officers than we could count.  Naturally we were curious as to why they were there, but chose not to investigate and hurried along.

As we reached our ‘attack transport’, I overheard the dialogue on the police radio which happened to be quite audible. The ‘assailants’  they were in ‘pursuit of’ matched our exact profile.

I blurted out to John, “Dude, that’s us!” I had barely finished that statement when we heard an ominous directive: “FREEZE!! PUT YOUR HANDS BEHIND YOUR HEAD AND TURN AROUND SLOWLY!”. We complied, and as we faced them in their ‘locked and loaded’ positions, we came to grips with the fact that one false move might be our last. I believed at that moment we had every cop from three towns present on the tarmac pointing their high-caliber pistols and military-style machine guns at our helpless bodies.

They then ordered us to get on our knees, and then face down on the pavement.  Never mind that it was the middle of summer and we had to lay flat on asphalt sporting temperatures comparable to a restaurant griddle on high heat.  Also, my hands were behind my head, and that caused my shirt to rise slightly above my bared navel. I could feel my midriff becoming well done on that hellish parking lot. Still, there was no way I was going to pull my shirt down and risk meeting my maker at the tender age of 22.

We were aprehended and handcuffed before being escorted to the back of a squad car. The officers then searched John’s vehicle for the ‘doomsday device’ he had been flaunting only 30 minutes earlier.  Having ‘secured’ it, they  confronted the complainants and advised them of their right to proceed with their little matter of pressing charges against our conspiracy to commit ‘widespread’ assault on the local populace. With compassionate regards to our folly, they embraced a feeling of silliness filing a weapons charge against two suspected desperados brandishing a ‘BB’ gun.

The police then let us out of the squad car after stating that no charges were being filed. We were free to go and they did not have to tell us twice. We fled the area as fast as we could which allowed me the liberty to inspect the 2nd degree burns on my stomach while in route. Unfortunately, this was not the first, and definitely not the last time I would be stuffed into the back of a squad car.

Now, I’m sure that anyone hearing this story from yours truly would find it hard to believe that he could be so ignorant.  But I truly believe that every experience we endure helps mold us into the person we eventually become. As for those officers involved, what I felt about them then could not be printed here. And I have already shared the way I feel about them now. So that is that!

Oh, and I would strongly advise NOT to point a BB gun with a scope attached at potential targets while checking it out inside an airconditioned car sitting in a Kmart parking lot ANYWHERE near a small desert town patrolled by antsy officers ready to blow your head off due to the slightest provocation.