THOUGHTS ON FIREPROOFING YOUR HOUSE 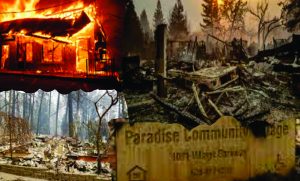 I had been watching the series on This Old House that revolved around the devastation that took out the entire community of Paradise, California due to a relentless forest one year. The item that struck me most was the fact that most of the residents planned to rebuild their homes there, well knowing that what happened at that fateful moment in time could rear its ugly head once again.

Having been a resident of the State for many years, I am well aware of the dangers of living there. If you are not trying to survive earthquakes, mudslides, and flooding, you still have high winds that have a bad habit of fanning forest fires until an inferno is created that burns thousands of acres before the embers die out. The sad fact is, these fiery disasters happen every single year.

The main concern about any town nestled within the vulnerable mountain forests of California is that it will always be situated in a prime location subject to a potential devastating holocaust. But the residents don’t seem to care. They will rebuild and live there again. So, in that regards, this blog will be dedicated to revealing my thoughts on fireproofing a House.

I am now living in my first house with a metal roof. Since this is also our first house in a forest environment, it pleases me to know I have a roof system that will not be readily damaged by fire. If embers from a burning tree land on one or more of the metal panels, the area will turn black but not burn through. However, to enhance the integrity of the structure, I did make the important decision to replace all 2500 screws that hold the roof in place with larger ones along with fresh washers that will effectively seal against water penetration for years to come. I simply figure I might as well upgrade that important resource while it is still viable.

A previous home we owned had an old tile roof that was eventually damaged by a hurricane and a fat contractor who made things worse when he did a pressure wash cleaning of the roof. The broken tiles left behind sealed our fate.

I had to have the whole roof replaced and chose new barrel style Spanish tiles for the project. Even though fire penetration was not a real concern for me back then being that the house was located in a low risk area, the end result provided a solid fireproof system along with the rigid protection needed to fend off high winds and rain.

Unfortunately for the majority of homeowners in that State, most of the protective materials on their roofs consisted of either the Fiberglass Asphalt composition type or Wood Shakes/Shingles which happen to dry out over time. Both of these systems are highly flammable, even if treated with fire retardant chemicals.

When I watched the TOH episodes, I noticed immediately that featured houses were once again covered with the dreaded Fiberglass Asphalt shingles. Even though stricter codes were initiated to lessen the chance of devastating damage from another forest fire, this facet of the house should have received better consideration. Yet it did not.

When Kevin O’Conner, the TOH host, interviewed a contractor installing siding on one house, he made note of the material being used. It was ship lap siding (8” x 1/2”) that was not fire-rated and made of OSB board material. Even though the protective sheathing behind the siding had a 1 hour rating, the siding itself stood an excellent chance of getting burned to a crisp in any forthcoming maelstrom.

When I built new custom homes in New Orleans after Hurricane Katrina, I did not want the problem of dry rot or termite damage coming back to haunt me. So I installed all the homes I built with cement board siding which looked liked wood, but did not invite infestation by insect critters or mold. It also had a much higher fire rating than any other material I could have used.

Another thing that I did was to caulk all the seams and joints so that no insects or creepy critters could sneak in and cause problems. That procedure also stopped air penetration between the boards that might provide oxygen for a fire. It cost me more money to do this, but I never had any complaints later on. Maybe a moot point in this discussion, but important, nevertheless.

Do you know where your water supply outlets are located? I found that I had one exterior outlet when I first moved in. It was located 15 feet from the front of the house and was broken off at the spigot. When I activated the water pump, water shot out like a gusher.

After fixing it, I added 2 more outlets. I installed one on the side yard and one in the rear. I can now reach every part of the house in case of a fire with a 75 foot garden hose (commercial grade of course).

In case the fire destroys the power lines to the house, I have a generator that can run the water well pump to keep water flowing to put out the fire. (That’s assuming I am still alive and not turned into a piece of charcoal by then).

Something that few people pay attention to is the proximity of trees and shrubbery in relation to their house. Dry grass, dead bushes, and large trees with branches that contain no leaves at all can be formidable pathways for fire to infiltrate and destroy your sanctuary.

I had a windstorm in California cause an electric transformer buried inside dry tree limbs next to a house we lived in at the time to catch fire. I sprayed water on the area surrounding the burning box, but not on the unit itself. I was able to contain the fire until the transformer fire died out. Needless to say, we lost power for awhile, but saved the house.

Now, I have no trees close to the house I now live in and keep the nearest ones trimmed back. My biggest threat is a large, tall tree alongside the water pump house (20 yards away) that could reach my overhead power lines to the house if it fell towards them. But it has a massive trunk and a long deep main root down into the ground. It would take an apocalyptic event to topple that sucker, so it is not an immediate concern for me.

If I had lost my home in a town that was constantly threatened by, and then completely destroyed by fire, I would collect the insurance money, leave, and never look back. But that is easy for me to say. Especially since I have never left one of my homes to seek safety when they were battered by a hurricane at one time or another.

If you love the place that you live in, you will be empowered to find a way to start over again and risk the possibility of something happening again. It’s part of life I suppose.

But if you get a second chance, make the best decisions you can to give yourself a better opportunity to survive. Add to that factor a better chance to come out of your dilemma alive. A lot of people didn’t in the Paradise Fire, and those who chose to return risk the prospect of themselves dying  as well.