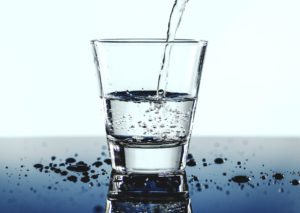 The rural or country house almost always has a Water Well Pump for supplying water and most of them have a Deep Well with a Submersible Pump type that pushes water up from an aquifer into your house and the spigots outside. If it stops working, you have no running water. When I lived in the city, I took the water supply for granted as long as I paid the monthly bill. Now I lived where I had to be responsible for my own system.

After looking around for an answer, I noticed a power pole with a deactivated meter box attached near the outbuilding storage shed (about 30 yards away). Inside its rusted cover I found a 220 amp breaker in very poor shape. It had an underground rated Romex cable coming out of it and going straight into the ground below (sans any type of conduit protection).

Messing With A Secured Electric Meter

While figuring things out, I found A similar cable coming out of the ground at the water pump house and attached to the pump switch box. To make matters worse, the poorly protected breaker inside the rusted panel box had also seen better days.

In any event, I wanted to see if this extra meter on the property was responsible for supplying power to the water well pump. Since flipping the breaker did not resolve the issue, I suspected the meter connector tongs had been plugged and the power company somehow did not have it included on their connect list when I had them energize the house. So, I clipped the sealed wire on the band holding the meter in place and removed it. I then removed the plastic tabs on the connector tongs, reinstalled the meter, and Voila! The water pump came on and I had fresh water.

On my next trip to the house, I found that the meter had been plugged again. When I confronted the power company, they said the meter was listed on their records as being on a separate lot apart from the one my home was on. To activate it, they wanted an extra deposit and would add monthly fees to be assessed above those charged to my house account. They also wanted to charge me a $3000 fine for messing with the isolated meter in the first place.

As I discussed in another blog, I told them to pull the meter and disconnect the electric supply wires to that separate pole. I said I would run an underground electric line from the house to the water pump instead. For added measure in my favor, they waived the fine when I threatened to challenge their outdated files. I had used the argument that the county tax assessor already had my property listed as a single entity and I told them they better update their files accordingly.

Following that ordeal, I made a follow up trip to the house, this time with my wife. As expected, we saw that the meter had been removed and wires from the county road power pole to my meter pole were gone. Now I really had to act quickly on my new pump house electric supply plan.

After seeing that the water flow was sufficient and that both the holding tank, as well as the pump head, were in good shape, I moved forward with my plan. That meant that all of my attention could be focused on the needed electrical supply line and commensurate equipment required to make the whole thing work.

I first installed an extra (and updated) full-house-rated 200 amp breaker box in the utility room next to the older existing one. I then ran 1-1/2″ pvc electric wire conduit from that box, under the house, and out and down into a trench that I dug by hand all the way to the pump house. Then I filled said conduit with #6 Romex style cable.

Since I also had an RV travel trailer to consider, I wanted enough capacity to run both the 220 volt pump and the 110 volt/30 amp electric supply for the RV. To meet that requirement, I ran a #10-3 wire Romex cable inside of 1″ pvc conduit placed underground from the pump situated breaker box to a new RV style outlet attached to the abandoned power pole.

Being that the pump was a 220 volt unit, I protected it with its own double pole breaker inside the sub panel breaker box attahed to the pumphouse wall. This allowed the RV outlet to have its own breaker and a third outlet to have a separate one of its own. Now I had this subpanel breaker box (protected by a 60 amp beaker in the house) set up to perform 3 functions:

Since I did the work myself under the guise of my general contractor’s license in place of that done by an expensive electrician, my cost for materials only came to about $200. That figure can be reduced to about $100 if you are running electricity for use by the water well pump only.

As a bonus, when I contacted the well pump inspector, I discovered that he had installed the pump about 6 years prior to my purchase of the house. Since it had been vacant for at least 4 of those years, my research indicated that I had about 10 to 15 years of life left in the unit. However, I will have to keep an eye on the storage tank for possible leaks and the switch box for malfunction because there are contacts in it that can corrode over time.

With that said, I can summarize my findings by saying that I have found it makes no sense to forgo a working knowledge of your pump. Periodic maintenance on your well will go a long way to help you avoid malfunctions at inopportune moments in time. It could take a week or more to get it fixed or replaced by a professional service operator. For myself, I am learning preventative maintenance procedures as time goes on. After all, carting water to the house is no fun, and probably can be avoided with a little bit of knowledge and care. Take heed and you will save yourself a lot of trouble going forward.