WHAT IS EATING OUR CATS 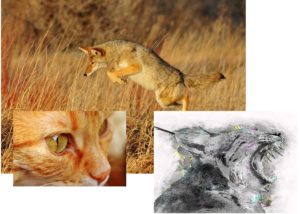 Wild Animals On The Country Homestead

Surrounded by pine trees and other types of fauna you might find in a forested environment, I wondered what species of predatory animals were lurking in the woods nearby or on the perimeter of my property. It took awhile before any wildlife knew we were here because the house had been vacant for at least 4 years, if not more.

After finally finding and acquiring my place in the country following years of pursuing that dream, I was satisfied that the location nested in the Panhandle area of Florida. The details of my sojourn are laid out in my series called the Budgethouse Renovator which alludes to another category on my website entitled the Country Hybrid, a type of lifestyle that defines my current modus operandi. By moving from the big city to a rural homestead, I embraced the transition from a chain link protected apartment complex and suffocating traffic filled streets to a fairly isolated home on a county maintained dirt road. However, the city slicker side of me favored the location because shopping conveniences are still only a few miles away. Wildlife, on the other hand, is parked maybe 50 yards away in the distant woods, or so it seems.

A big possum periodically tries to pull the locked cover off of our trash can. One or two raccoons help themselves to pet food dishes on the back porch. My grand kids found a snapping turtle near a pond on the property. And a few snakes have entered into the mix. Vultures are always flying overhead and a flock of them sometimes use my roof as a staging area.

As for our contribution to the mix, we brought 2 black cats and 2 pet birds with us when we first moved in. When our daughter brought a pregnant Tabby with her from Nevada which eventually gave birth to 4 kittens, we ended up with 2 Conures (parrot like birds) and 7 cats to watch out for. Letting all those felines go outdoors at night, after the babies were fully grown, seemed like a good idea at the time, but I think that was a city-slicker mistake!

Suspect Panhandle Predators On The Prowl

One of the black cats disappeared right off the bat and we think it got run over by a car on the highway about a 1/4 mile from our place. The second one eventually took off for a while, came back, and the decided it didn’t like the new Tabbys on the premises. He left a few nights later, never to be seen again.

Of the five cats that remained, 2 of them disappeared on different nights. I figured something was getting them out there, but we didn’t know what. So we decided to bring the 3 remaining cats in each night and only let them out during the day. This may not be a fool-proof concept for survivability, but they were still with us after many months of living in the house we are in now.

With all that said, I eventually tried to find out what type of predators existed near us or what possible candidates could fit the bill. My research showed that our area is home to bobcats, coyotes, a few rare wolves, large rattlesnakes, hawks, owls, you name it. The surrounding woods are perfect hiding places for any animal, especially those that prowl at night. A lack of applicable watering holes and a flowing river or swamp nearby sort of cancels out critters like alligators for the most part, but don’t quote me on that!

Without a critter cam(era), we can’t capture what lurks in the shadows after dark. It is pitch-black here after the sun goes down so I would need something with night-vision capability. It would also have to have a motion detector built-in as an integral part of the mechanism.

My further research efforts revealed that there may be as many as 70,000 coyotes living in all 67 counties of Florida. An article from a Sarasota publication talks about how they have been seen walking around neighborhoods at night. They are well adapted to living in the South and can even mate with your pet dogs if conditions are right.

Domestic cats are high on their menu. Ours may have mistaken one for just another local dog and became easy prey for the savvy canines which are one of the fastest animals afoot and are expert hunters with a high degree stealth capabilities. Powerful jaws can make quick work of a struggling puddy tat.

Bobcats are another possibility that could also be holed-up in the nearby woods. Any type of burrow like a hollowed out log, hole in the ground, or collection of dead trees would suffice as a den. Our cats would not stand a chance against this fearsome animal. Add a bad temper to the mix, and there you have it.

I have never seen one in the wild, only its distant relative known as a puma or mountain lion. Documentaries I have watched about them are scary. When they charged a cameraman on one particular episode, the critters left very little time for him to react. It was obvious that quick slashing claws could make mincemeat out of any small foe. A domestic cat could be taken out in a heartbeat.

No owls have been seen nearby, and hawks only hunt during the day. A rattler isn’t looking for something way bigger than itself, and wolves have all but disappeared from the Deep South.

I found out a license is not needed in Florida to kill a coyote. They are considered a “nuisance species”. That issue changes somewhat if you use a steel trap, but even if you catch one and kill it, another one will probably move into the vacated territory becoming a new predator in the process, so what’s the use. Also, you should familiarize yourself with the gun laws in your community before shooting one.

Bobcats, on the other hand, require a Florida hunting license. Only one can be hunted by a person during the season. Pelts require a tag before being sold or when they leave the state. I find the information on trapping them to be less than encouraging, and again, a new one can move into a vacated area. I think the best recommendation is to let a professional trapper or wildlife control entity get rid of one that is a problem.

Bobcats are fierce animals when they are trapped, so they will need to be treated with caution to ensure that they do not get the opportunity to attack. For those individuals faced with moving or transporting a bobcat when they are not in a cage, it would be wise to use a catch pole and to wear protective clothing. (Source: aaanimalcontrol.com)

So What Are Some Of The Things You Can Do?

My research has uncovered the following facts.

With all of that said, I have found that living in the country with the local wildlife all around you is a tricky proposition. The more we encroach on their territory, the more they will adapt to tracking, catching and eating our pets as a readily available source of food. A city bred cat that moves with you out into a rural environment is at a distinct disadvantage and we can only help them out by giving them a fighting chance to survive!